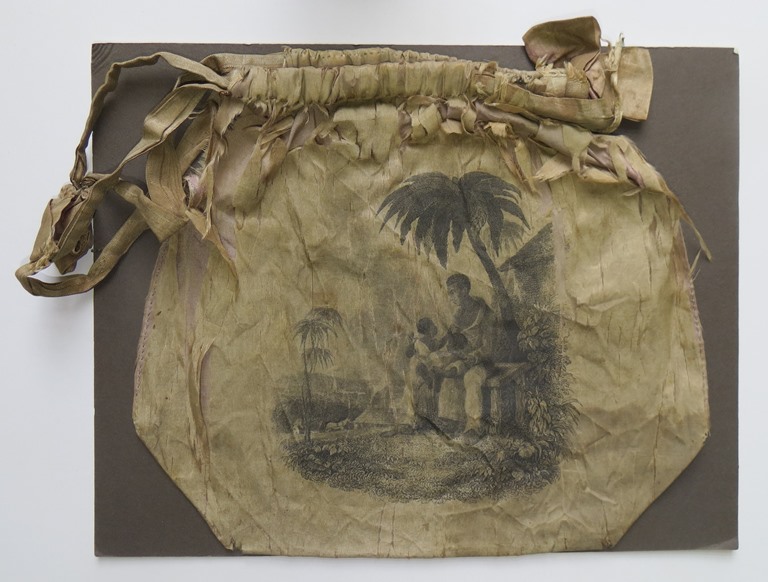 This reticule is a beautiful but very delicate object. It is made from unlined pale pink silk with a drawstring at the top. On one side, the image of a seated male slave with his two children has been painted in black. On the reverse, there is a poem entitled ‘The Slaves’ Address to British Ladies’.

The reticule was made in the 1820s by a female campaign group, to raise funds and awareness for the anti-slavery movement. Although Britain officially ended its participation in the slave trade in 1807, slavery continued in the British Empire and in 1823, William Wilberforce formed the Anti-Slavery Society to campaign for the end of slavery in the colonies. Whilst women were allowed to join the society, they could not form part of its leadership, so a group of women in West Bromwich formed their own group, later called the Female Society for Birmingham. Other groups formed across the country and by 1831, there were 73 female organisations campaigning for the immediate and full abolition of slavery

Many of these groups produced objects such as bags, jewellery, prints and pin cushions, decorated with abolitionist emblems, images and text, which were sold or distributed as part of their campaigns. Silk bags and reticules like the one in our collection were filled with campaign pamphlets and newspaper cuttings and distributed to prominent people, including King George IV and Princess Victoria, as well as to other women’s anti-slavery societies.

It is very likely that this reticule was made by the Female Society for Birmingham. It is similar to reticules made by the society in the collections of the Victoria & Albert Museum, the Museum of London Docklands, the Library of the Religious Society of Friends, and the Daughters of the American Revolution Museum in Washington DC. However, another example matching this particular design has yet to be found.

The reticule is an important part of the Quaker history of Saffron Walden, which was home to some prominent Quaker families such as the Gibsons, Tukes and Frys during the nineteenth century. The abolition movement in Britain was established by the Quakers, who believe that all people are created equal (and therefore one person cannot be owned by another).

Sadly, the reticule is in a fragile condition and cannot be handled or displayed. We are currently fundraising for conservation work to stabilise the reticule, enabling us to display it in the museum and share its fascinating history. If you would be interested in donating to the fund, please contact us.