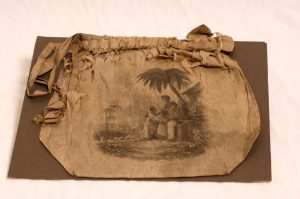 This silk reticule (bag) was made in the 1820s to support the campaign to abolish slavery. It was donated to the museum in 1927.

The reticule is a beautiful and very delicate object.  It is made from unlined pale pink silk with a drawstring at the top. On one side, the image of a seated enslaved man with his two children has been painted in black. On the reverse, there is a poem entitled ‘The Slaves’ Address to British Ladies’, which reads:

‘Mothers of the fair and brave
Heavy is the debt you owe
For the sufferings of the slave
Thro’ an age of pain and woe.

Shall your sons with freedom blest
Be the oppressors of our race
As I plead, each noble breast
Kindles at the foul disgrace.

Torn from Afric’s sunny plains
By your fathers’ cruelty
We have groaned in heavy chains
We have pined in misery.

But a brighter day is near
Blessings by your justice given
Faithful wives & children dear
And the hope of Joy in Heaven.

We shall bless your holy zeal
In our lisping girls & boys
For we have a heart to feel
All a parent’s anxious joys.

We shall see the harvests wave
And the sweets of science know
Freemen – at the name of Slave
Shall our souls indignant glow.

The reticule was made in the 1820s by a female campaign group, to raise funds and awareness for the anti-slavery movement. Although Britain officially ended its participation in the slave trade in 1807, slavery continued in the British Empire and in 1823, William Wilberforce formed the Anti-Slavery Society to campaign for the end of slavery in the colonies. Whilst women were allowed to join the society, they could not form part of its leadership, so a group of women in West Bromwich formed their own group, which was then referred to as the Ladies Society for the Relief of Negro Slaves (later called the Female Society for Birmingham). Other groups formed across the country shortly after and by 1831, there were 73 female organisations campaigning for the immediate and full abolition of slavery.

Many of these groups produced objects such as bags, jewellery, prints and pin cushions, decorated with abolitionist emblems, images and text. These items were sold or distributed as part of their campaigns. Silk bags and reticules like the one in our collection were filled with campaign pamphlets and newspaper cuttings and distributed to prominent people, including King George IV and Princess Victoria, as well as to other women’s anti-slavery societies.

It is very likely that this reticule was made by the Female Society for Birmingham. It is similar to reticules made by the society in the collections of the Victoria & Albert Museum, the Library of the Religious Society of Friends, and the Daughters of the American Revolution Museum in Washington DC. However, we have yet to find another example matching this particular design.

Conservation of the reticule

In 2017, the museum acquired funding to carry out conservation work on the reticule. The reticule was in very poor condition – the silk had faded and was stained, large areas of the silk had badly shattered and were coming loose, and the reticule could not be handled or displayed without causing further damage.

With funding from the Daphne Bullard Award, the Saffron Walden Quaker Meeting and individuals in our local community, the museum was able to pay Poppy Singer, a textiles conservator, to carry out vital conservation work. Poppy cleaned and reshaped the reticule to its original shape, made an internal support bag and pad, adhered the fragmentary silk, and added very fine netting over the top to prevent future damage. Thanks to Poppy’s work, the reticule can now be carefully handled and displayed in the museum for short periods of time.