This magnificent object is a Dutch cheese press.. It stands on two large feet, with a handle which hooks onto the structure when it is not in use. It is beautifully carved, and the two pillars on either side of it are carved with the image of a lion holding a crest and a bird. It has been painted red, black and gold and is highly decorated. It also has the inscription ‘1723 AO’ carved into it. The date may be when the cheese press was made, but we don’t know what AO means – it might be the initials of the owner of the cheese press. These were often given as wedding gifts, so it is possible that ‘AO’ is the initials of the bride and groom whom this was given to.

This cheese press has been in our collection since 1888, when the museum purchased it from a sale of old oak at Stansted Hall. It was long thought to be a cheese press, but we recently asked the Cheese Museum in the Netherlands, who confirmed that we were correct. The Kaasmuseum (Cheese Museum) in Alkmaar in the Netherlands has 8 to 10 cheese presses similar to this one, which date to the eighteenth century. The museum believes ours may date to between 1820 and 1850, even though it is inscribed with 1723. 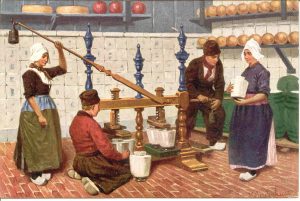 Postcard from Noord-Hollandsche Kaasmakerij, which shows what a cheese press would look like when in use.

A cheese press was worked by hand to create semi hard and hard cheeses. A cheese vat, filled with curds, would be placed under the press, and the handle would be used as a lever to press a piece of wood down onto the press. Weights would then have been hung from the handle after 30 minutes, with further weight being added at 60 minutes. This would have pushed water out from the curds, helping to solidify a hard cheese.

We love researching and learning more about the objects in our collection. Some of the items the museum acquired many years ago do not have complete histories, so being able to fill in some gaps is very exciting! If you would like to see the cheese press, it is currently on display in our Local History gallery.