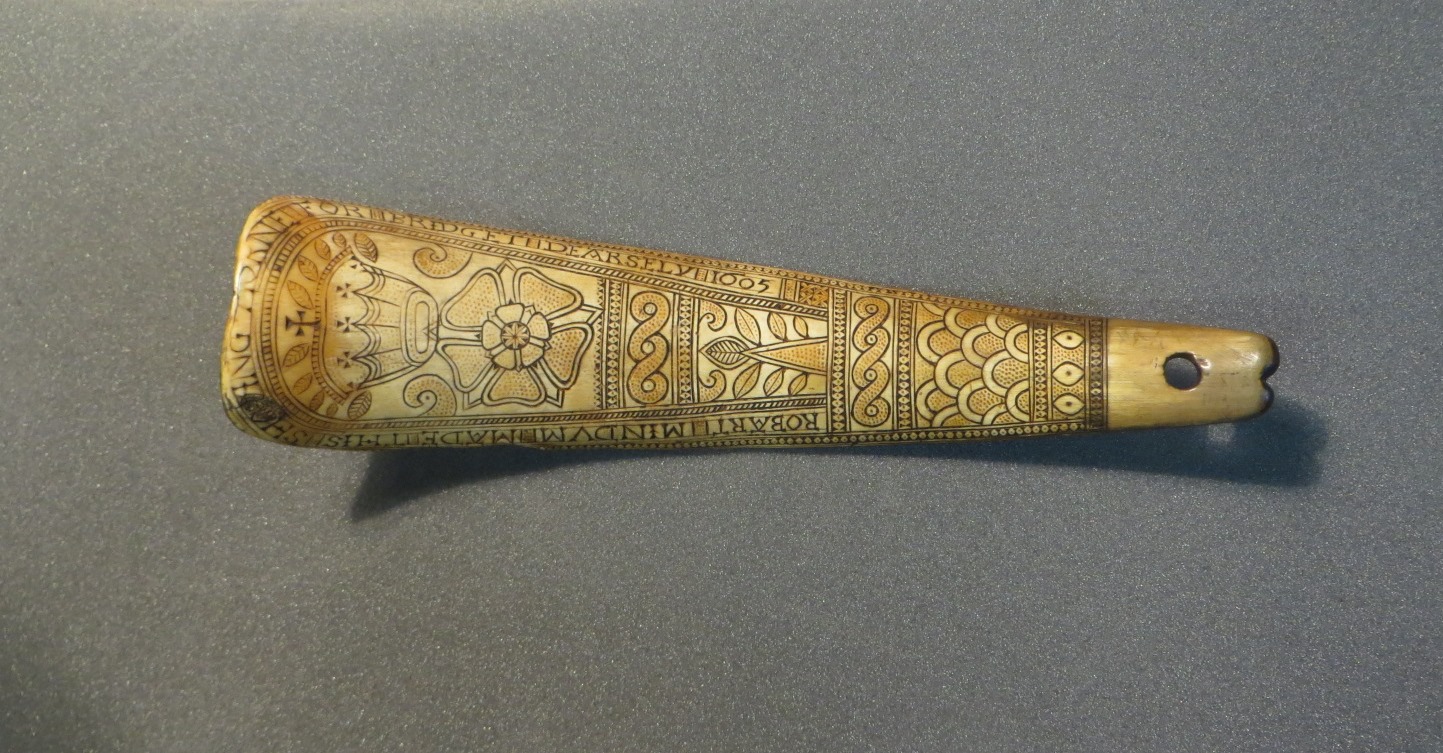 I was asked by Saffron Walden Museum Society to give a short talk at their AGM last night. Many of the Society members know that I love to share my passion for social history objects, so this seemed like the perfect opportunity to do just that. I chose a group of objects that I, and my team of volunteers, came across whilst packing up collections for our store move. I believe these are some of the most fascinating, unusual and fun objects in our collections and the Society members seemed to agree!

This shoehorn (pictured above) is one of my favourite objects in the collection and the object that inspired me to create the Object of the Month scheme. It was made by an English craftsman called Robert Mindum, who was making shoehorns between 1593 and 1613. Our shoehorn dates from 1605. It is made from animal horn and it has a decorative design, created with incised lines and dots, which includes the Tudor rose and crown. There is an inscription around the edge, which reads “Robert Mindum made this shoeing horn for Bridget Dearsley 1605”.

So far, 25 shoehorns made by Robert Mindum have been found and they have been catalogued by Wayne Robinson. All of the shoehorns feature an inscription, with the name of a person and the date, which suggests that they may have been made as gifts. Shoehorns were common gifts in the late 1500s and early 1600s, as the popularity of soft, flexible leather shoes rose. 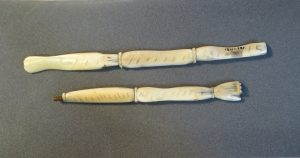 There were over 100,000 French prisoners-of-war in Britain, taken between 1803 and 1814. The nearest prisoner-of-war camp to Saffron Walden was Norman Cross, near Peterborough, so it is likely that these objects were made there. The prisoners remained captive in Britain for the whole of the conflict and conditions were often terrible, so many prisoners made trinkets such as this to occupy their time and to sell for a little money to make life more bearable.

This knitting sheath was donated to the museum in 1835, making it one of the earliest objects in the museum’s collections. Knitting sheaths were designed to be worn on the right hip and to hold a knitting needle, leaving one hand free to work the thread. This is an example of a chain sheath, which were carved from one piece of wood, showing a great deal of technical skill. The most complex and delicate chain sheaths were made by shepherds in Essex and our knitting sheath is one of the only provenanced examples. It was made by James Bradford, a shepherd in Debden, who donated it to the museum just before he boarded a ship and emigrated to Canada. He had carved it with his pocket knife!

This is a navigational instrument known as a nocturnal. It was used to tell the time at night, using the relative positions of the North Star and one or two other stars in the sky. Our nocturnal has ‘FOR BOTH BEARS’ inscribed on it and it used the Great Bear and the Little Bear. The nocturnal could be used to tell the time to within 10-15 minutes.

The nocturnal was first invented in the 1500s and it was regularly used by mariners. It was also used by some rural communities until the 1800s to set their town clocks. 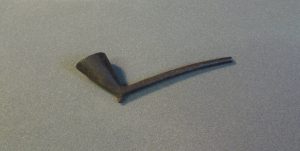 This pipe is listed in our accession register as a plague pipe, meaning that is was smoked by people whilst they were burying victims of the plague. It was dug up in the garden of Debden Rectory and donated to the museum in 1950.

Pipes like this would have been smoked during the plague of 1665-1666, to protect against ‘miasma’. It was believed at the time that diseases such as the plague were spread by bad smells or bad air, known as miasma, which came from rotting organic matter. This theory was believed for centuries, until the development of germ theory in the 1880s. 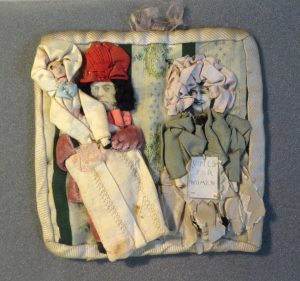 This collage shows a woman holding a placard reading ‘Votes for Women’ and a man, presumably her husband, holding the baby! It was donated, along with a large collection of ornaments and trinkets, by a woman called Miss Hassall who lived in Saffron Walden.

Sadly, we don’t know very much about this object, when it was made or why. Perhaps it was made by Miss Hassall as a school project about the Suffragettes. However, I think it’s a wonderful object and it makes me smile every time I see it!

These objects are just a small selection of the fascinating and unusual social history collections we have at Saffron Walden Museum. Look out for them as Objects of the Month in the near future!