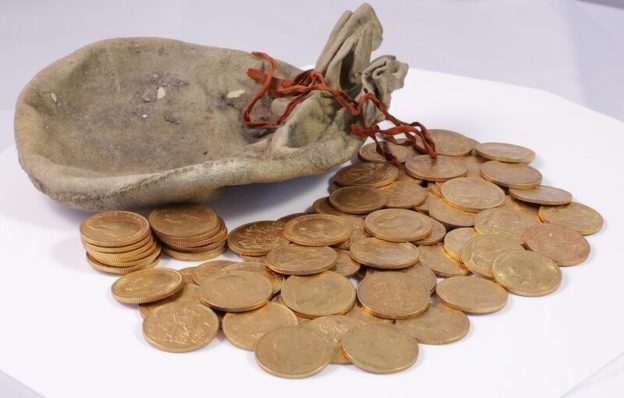 In 2017, a hoard of hundreds of coins was found inside a piano in Shropshire. Investigations showed that the coins were hidden by a Saffron Walden resident in the early 20th century.

The coins date from between 1847 and 1915. They were deliberately hidden inside a Broadway upright piano by a Saffron Walden resident sometime in or after 1926. We know this because the piano has a plaque reading ‘Supplied by Beavan & Mothersole, 27 West Road, Saffron Walden’. Beavan and Mothersole were piano suppliers, tuners and music professors.

The coins were placed into small packages and pouches, carefully made from cardboard and covered with fabric. One of the pouches was made from a cereal box and the branding on the box helps us to date it to between 1926 and 1946.

We don’t know why the owner of the piano hid the coins or why they were never retrieved. Perhaps they simply considered it a safe place to hide their family’s wealth. Perhaps the coins were hidden during the Great Depression in the 1930s. The questions surrounding this hoard only add to its intrigue and appeal.

The coins remained hidden until the piano was moved to Shropshire and donated to a local school. A piano tuner discovered the coins and reported it to the local Finds Liaison Officer.

Because of the value of the coins and the fact that they were deliberately hidden, they have been classed as Treasure under the Treasure Act of 1996. The museum would like to acquire a selection of the coins and the piano, so that we can display them in the museum and create education sessions for local schools.

But we need to raise about £3000 to do so. Can you help us bring these coins home to Saffron Walden, where they belong? So far, we have raised £530 so we still have a way to go! Any donations would be gratefully received.