Preparing for the opening of the museum

This is the third in a series of blog posts exploring the earliest years of Saffron Walden Museum and the society that established it. In this post, we examine the society’s preparations for the opening of Saffron Walden Museum. With thanks to Len Pole, who has been instrumental in studying the earliest available records and helping to compile a history of the museum.

Saffron Walden Natural History Society had been collecting specimens for almost two years before the museum opened in 1835. The saga of acquiring a number of animal skins and skeletons from Robert Dunn (see blog post two) took place when there was no physical museum site and the society most likely stored these specimens at the home of Jabez Gibson, the chairman. As well as hundreds of specimens, the society was also collecting display cases and other pieces of equipment long before the opening of a museum building, meaning Gibson’s home must have been very crowded!

While Gibson’s house was a temporary home for specimens and cases, plans were in motion for a museum building. Initially the trustees proposed the museum be set up within the ruins of Walden Castle but it was then decided that a new building would be built on Bury Hill, between St Mary’s Church and the castle. This land belonged to Lord Braybrooke of Audley End, who leased it to the trustees and the new museum building was erected in 1835. Part of the building was to be used as an Agricultural Hall for the Walden Agricultural Society and the rest as the museum.

In a meeting on the 8 April 1835, the division of curatorial duties was agreed:

Jabez Gibson and John Player: Conchology [the study of shells]

The museum opened to the trustees and subscribers on 12 May 1835 and to the general public three days later. 51 paid for admission, including Nathan Maynard, the father of George Nathan Maynard who went on to be the first paid curator of the museum. He described his visit:

“Stuffed birds and animals – shells, bird’s eggs, nests, skeletons and several bones of the mammoth – a beautiful rhinoceros, stuffed, which stands in the centre of the room, Indian curiosities, insects, casts of heads, medals, minerals, petrifactions, etc., etc., head of an elephant, of a hippopotamus, horse, cow, etc. ”

The museum thus opened to the public, beginning its story as one of the oldest purpose-built museums in the country. It opened during the summer months, every Tuesday, between 10am and 3pm. The museum was known for its displays of natural specimens, especially the double-horned rhinoceros and the African elephant. 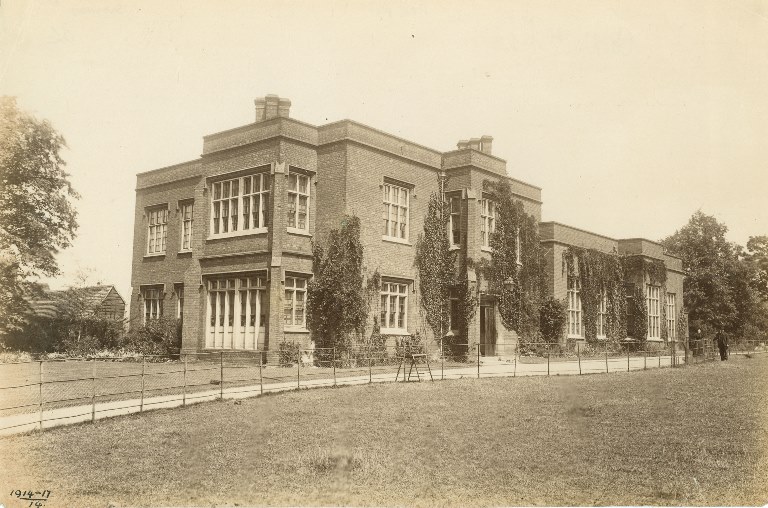 The museum c.1890. George Nathan Maynard and his wife stand outside the building.