This is the first in a series of blog posts exploring the earliest years of Saffron Walden Museum and the society that established it. In this post, we delve into the earliest recorded meetings of the founders of the museum, including the creation of the Saffron Walden Natural History Society and the committee’s gathering of objects. With thanks to Len Pole, who has been instrumental in studying the earliest available records and helping to compile a history of the museum. 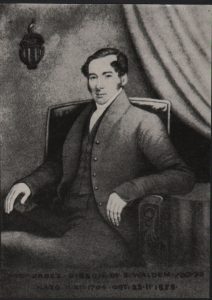 Saffron Walden Museum was established in the 1830s by Saffron Walden Natural History Society. The earliest recorded meeting of the society took place on the 22 November 1832, in the home of Jabez Gibson.  His property adjoined the cattle market in Hill Street, Saffron Walden,  it was most probably the large red-brick building where Kim’s Cafe now is, which overlooks Jubilee Gardens.

In this meeting, a statement of the society’s Rules and Regulations was written and the committee of the society was decided upon. The people placed onto the committee were Jabez Gibson (chairman), John Player, Thomas Spurgin, Joshua Clarke and William Ward.

Much of the early workings of the society are shrouded in mystery, as information has been lost over time. It is not clearly stated who the founders of the society were, though it seems likely that the founders were these five men, and it is even less clear how other people joined the society. The society had a group of ‘Friends and Supporters’ – anyone subscribing or donating a certain amount of money – but it is not clear whether these ‘Friends and Supporters’ became members of the society. The main purpose of the society was to establish a museum but it is interesting to note just how tentative they were in doing so. They were so cautious that they did not settle on the name ‘Saffron Walden Natural History Society’ until a meeting in 1834, 18 months after the first recorded meeting!

As was common with museums in the nineteenth century, the founders focused their collecting on Natural History. The first rule of the Rules and Regulations states “That a Museum be formed to include Specimens in the several Departments of Natural History, with Antiquarian remains, and other such Articles as may be of local or general interest”. The term ‘local or general interest’ is somewhat ambiguous, and suggests that the founders intended to collect whatever they found personally interesting!

It seems that between the first meeting in November 1832 and January 1833, the committee focused on collecting specimens for display and writing letters to various well-known figures of the period, such as botanists and professors, many of whom donated to the collection. Rule 10 of the original Rules and Regulations stated that the secretaries Mr. Spurgin and Mr. Clarke were “requested to enter into a Book the Several Donations (made to the collection) in order that it might be handed down as a Register of this Institution”. However, either Mr Spurgin and Mr Clarke ignored this request or the book was never handed on. The first paid curator of the museum, George Nathan Maynard, moaned about the lack of such a register when he was faced with the task of retrospectively creating one in the 1880s, working from committee minutes and presumably the recollections of surviving members of the society. The earliest recorded addition to the museum collection in Maynard’s retrospective register was from the Zoological Society, consisting of ‘30 birds and a deer’. 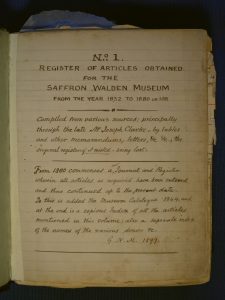 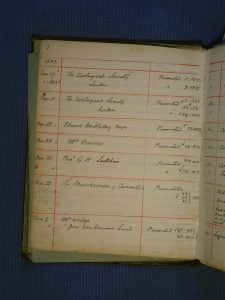 The first entrance in Maynard’s register

And so, the museum had a foundation: a set of Rules of Regulations and the beginnings of a collection. The focus on natural history  and specimens from fields such as zoology and botany was upheld by the museum curators, and the lasting influence of the early values of the Saffron Walden Natural History Society can still be seen in the museum and its collections today.