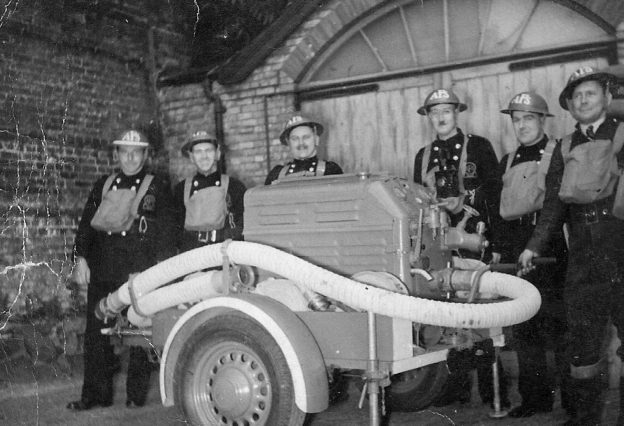 During the Second World War, there was obviously an additional need for access to sand and stirrup pumps because of the risk of incendiary bombs. The town was not a proscribed area, so fire watching had to be done on a voluntary basis; thankfully 200 volunteers came forward to support the town and the surrounding area. 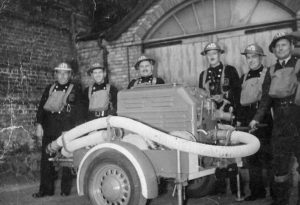 “A Rescue and Utility Party was organised under Mr W. Clark, and Mr Pryor’s utility van had been earmarked as an ambulance.  Standpipes and hose had been requested from RCC (presumably Rural Community Council) “for local practice in fire extinction.”  The first muster of the Auxiliary Fire Service at the Church Hall was held on 17 April 1939.”

“11.30 pm there was an air alarm.  All local groups quickly ready for duty.  Fireman at Stores Yard:  First Aid at Vicarage: Utility Party at Pakeman’s Yard: Wardens at Post.  Special Constables patrolling. No public excitement or crowding.  All clear went soon after 12.”

Childhood memory: “A spitfire crashed on the Downs during the Battle of Britain and burnt.  I remember ammunition exploding.  Mother kept me well away but I can remember the noise.”

In Clavering, they had a fire engine during the war, as part of the Auxiliary Fire Service with trained men to man it. There were concerns about incendiaries but there was only one serious incident when Parsonage Farm burned down as a result of a lot of incendiaries being dropped.

Ironically when a major fire did break out it was purely accidental and unrelated to the war. On Saturday 12th July 1941, a fire broke out in the disused Maltings at the top of Gold Street, next to the Sun public house. The Maltings were being used as a food depot by Sainsbury’s, who had moved the contents of one of their grocery warehouses from London to Saffron Walden for safety during the war.  The fire started around 9pm, the brigade arrived almost immediately, but the old timber and plaster building was very dry, and the flames spread rapidly.  The brigade, were again hampered by low water pressure and the staff dormitory on the top floor was quickly gutted.  A chain of soldiers, airmen and civilians was formed and they were able to salvage several tons of food, whilst others assisted in dampening down the fire with stirrup pumps and household garden hoses.  The brigade tackled flames over 50ft high and despite using over 100,000 gallons of water they sadly couldn’t save the Maltings building.  Luckily there was no loss of life and they managed to protect the surrounding buildings and stop the fire from spreading.  The local newspaper commented that “butter had run down the gutters.” 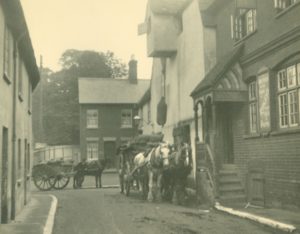 Pictured : The Gold Street Maltings in the 19th century

Len Crickmore was awarded the British Empire Medal (BEM) by King George VI in recognition of his gallantry when an ammunition dump exploded at Great Chesterford in May 1944. The NFS and Army Personnel had attended reports of an explosion.  Len Crickmore tried to stop the fire spreading to the bigger explosives, but whilst telephoning to notify that the nearby Jewish hospital and surrounding housing should be evacuated.  Another explosion occurred and he was blown into the air, through the roof of the hut and knocked unconscious.  Coming to he quickly rescued a colleague who had been injured and continued to raise the alarm.  Without him it could have been a disaster on a much bigger scale.

The town’s first cinema had been built in 1912 at the top of the High Street (South) close to the Baptist Church. The Walden Weekly had commented at the time of it opening that “great attention had been paid to ensuring the safety of the public.”  The building had been designed to be fireproof with half a dozen exits, powerful hydrants and the projector was held in a fireproof chamber 30ft from the main building.”  However, none of these measures were enough to stop it burning to the ground on the 23rd August 1950.  It was subsequently re-built and re-opened in 1954, before eventually being demolished in 1973. 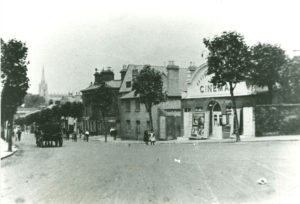