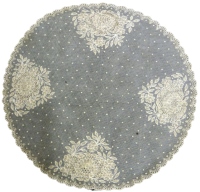 April’s Object of the Month is a table mat made from Coggeshall lace. It dates from the late 1800s. The mat is part of a small collection of Coggeshall lace in the museum’s collections, which includes table mats, a shawl and two chemisettes.

Coggeshall lace is a type of tambour lace, which is made by stretching a net over a frame and creating a line of chain stitches with a fine hook. The outline of the design on this mat is created using a chain stitch and the areas inside have been created using decorative ‘filling stitches’, such as honeycomb, bold smuggler and eyelet. 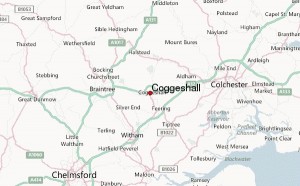 In about 1812, a French man named Drago and his two daughters moved to Coggeshall, a village in Essex, and began to teach women and children how to make tambour lace. Throughout the 1800s, tamboured net lace was made in tambour rooms and cottages in Coggeshall and the surrounding villages.

Lace manufacturers and dealers obtained orders from London and elsewhere and co-ordinated the Coggeshall lace workers. Among other stores,
Liberty & Co., the famous London department store, was supplied with Coggeshall lace.

Shortly after 1900, there was a great improvement in the quality of Coggeshall lace, thanks to the activities of two ladies called Miss Spurge. They were the chief employers in the district and together with their brother William, an art teacher, they improved the standard of design. 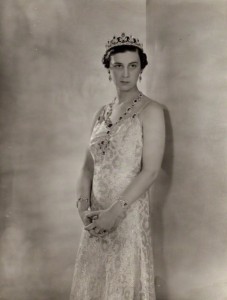 Unfortunately, the invention of chain stitch sewing machines and machine-made laces led to a decline in the production of Coggeshall lace in the early 1900s and this was made worse by the outbreak of World War I in 1914.

Today, Coggeshall lace is made by some members of the Lacemakers Guild and it is taught as part of a City and Guilds course.

You can see the table mat on display in the museum until 30 April.