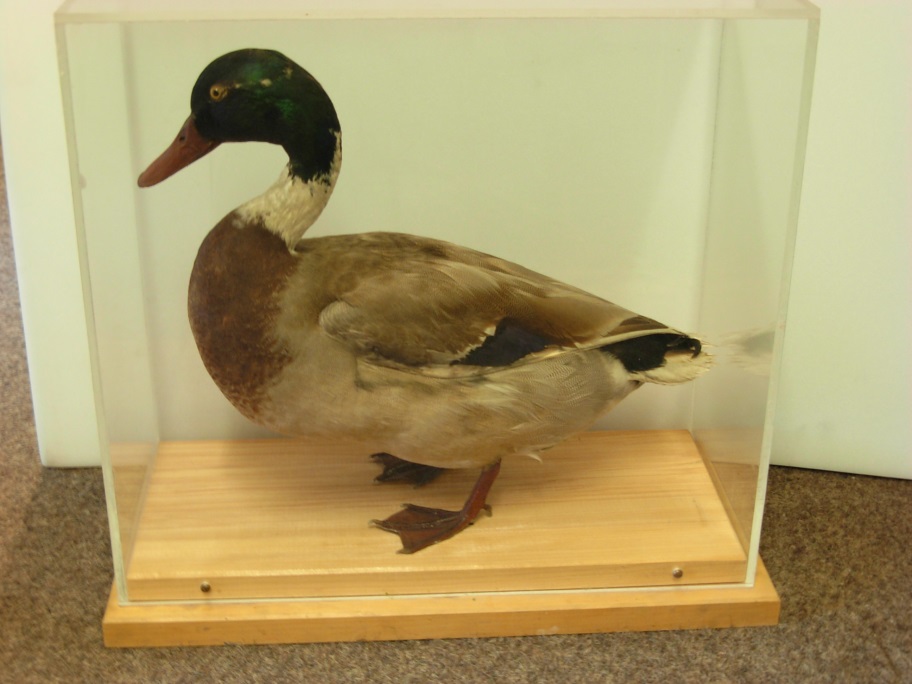 April’s Object of the Month is a male Mallard or Wild Duck. It was chosen by Sarah Kenyon, Natural Sciences Officer, to coincide with our Easter holidays trail (can you find all nine cuddly ducks in the museum?!)

A male Mallard is called a drake.  This mounted bird is contained in a Perspex case on a wooden base.  It is from a collection of objects that can be loaned to schools for use in the classroom.

Mallards are found all over Britain.  They are the ancestor of the domestic duck.  They live in towns and the countryside in wetland areas or near freshwater ponds, lakes, canals and rivers.  These dabbling ducks eat plants, insects and shellfish.  They feed in shallow water on submerged vegetation and small aquatic animals and graze on plants, seeds and berries in farmland. 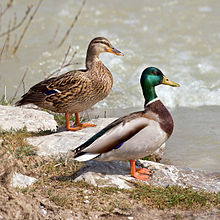 The female has pale brown, speckled feathers.  She is called a duck or hen.  Ducks lay and incubate 7 to 16 eggs. They look after all the ducklings.  Females make the more familiar loud quacking calls. The feathers of the drake are metallic green on the head, white around the neck, brown on the breast, grey and black on the rest of the body. The male makes a range of whistles or nasal calls.

The female duck has an orange bill and the male bird has a dull yellow bill. Curiously, the bill of this male bird is a dull red colour.

This duck is a skin which was preserved, stuffed and mounted in a life-like pose by a taxidermist during the 1800s.  The bird was labelled as a female mallard originally.  So the bill may have been coloured orange when it became a museum specimen.  It was later re-identified as a male mallard.

You can see the Mallard on display in the museum until 30 April 2017. If you would like more information about loaning the Mallard or any of our other School Loans boxes, click here or contact the museum