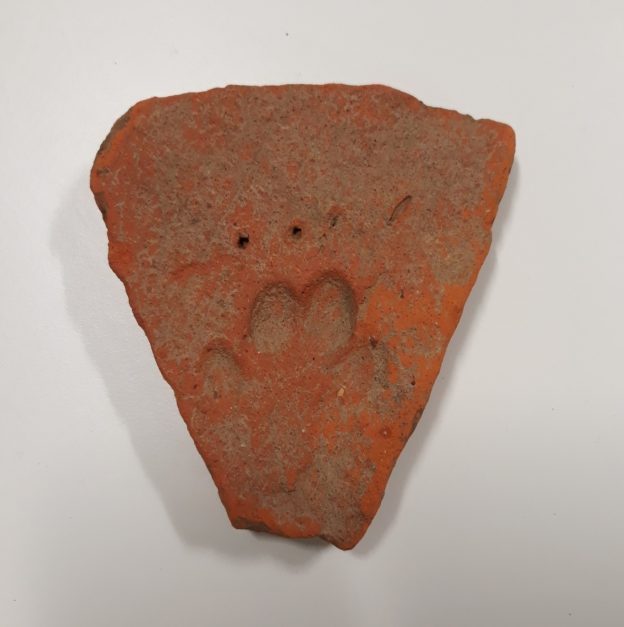 April’s Object(s) of the Month is a selection of pieces of Roman roof tiles with paw, hoof and foot prints left by animals and people over 1,750 years ago. The tiles came from a temple that was about 1km north-east of Great Chesterford, which was an important town in the Roman period.

Can you work out what sort of animal left the footprints? 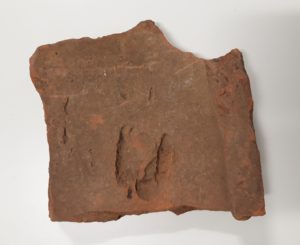 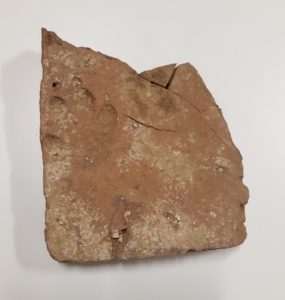 How animals left their mark
At the tile-maker’s yard, the wet clay tiles would have been laid out in the sun to dry before firing in a kiln. It was during this drying stage that tiles could be trampled over by any passing stray animals or domestic pets. Traces of footprints are found from time to time on Roman tiles, and the Great Chesterford tiles preserve prints from a number of different animals, including dogs of various sizes and cloven-hooved farmyard animals such as sheep, goats, calves or pigs. There is even the impression left by a hobnail boot or sandal, possibly from a workman trying to shoo away the animals that were treading on the unfired tiles!

The tiles with footprints are all pieces of tegulae – large, flat rectangular roof tiles with upturned sides. We do not know exactly where these tiles were made. Tiles and bricks were usually made near the building site if possible, where there was a supply of suitable local clay, water and wood to fuel the kilns. It was difficult and expensive to transport large numbers of tiles from a distance, though Great Chesterford’s position in the River Cam would have allowed materials to be brought in by boat.

Great Chesterford Roman Temple
The site of the temple, north-east of the town, was a special place before the Roman Conquest. Local British people had a shrine on the site in the late Iron Age. After the Roman conquest, in the late 1st or early 2nd century AD, the temple was rebuilt in Roman style as a square building with walls of mortar and chalk rubble faced with flint and plastered, and a tiled roof.

By the mid-3rd century (around 250 AD) the temple had fallen into disrepair. Large amounts of roof tile and plaster fell off the building and it appears that the remains of the roof was cleared away before a big programme of rebuilding started in the late 3rd century.

You can see the tiles on display in the museum throughout April and find out more about Great Chesterford, the temple and Roman building materials in our archaeology gallery.