The puppet was made by Joyce Sturge, a local artist from Saffron Walden, some time before the end of World War II. Joyce made the entire cast of puppets from the Punch and Judy puppet shows out of papier mache, as well as making her own puppet booth and performing the puppet show at children’s parties. She even made tiny sausages!

Punch and Judy shows varied slightly each time they were performed, but most followed a similar storyline: Punch argues with his wife Judy and mishandles the baby; a policeman comes for Punch, who beats the Policeman with a stick; and Punch faces a final enemy, often a hangman, devil, crocodile or ghost (although when the show was performed for troops during the Second World War, the enemy became Hitler). Punch and Judy shows are known for their fast pace, and for featuring lots of jokes, songs, audience interaction and slapstick comedy. 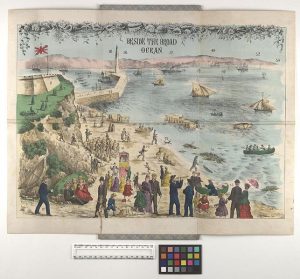 A Victorian illustration of things to do at the seaside. A Punch and Judy booth can be seen in the centre

Since the twentieth century, Punch and Judy has been gradually declining in popularity; the rise of music halls, theatres and cinema in the twentieth century contributed to its decline. An awareness of the seriousness of domestic violence damaged the show’s popularity in modern times for a time. However, the shows continue to be found at the seaside and for many remain a classic aspect of a trip to the coast: in 2006, the public voted Punch and Judy onto a list of icons in England.

Below is a gallery of all the puppets created by Joyce Sturge:

[Show slideshow]
You can see the Punch puppet on display in the museum until 31 August 2017.