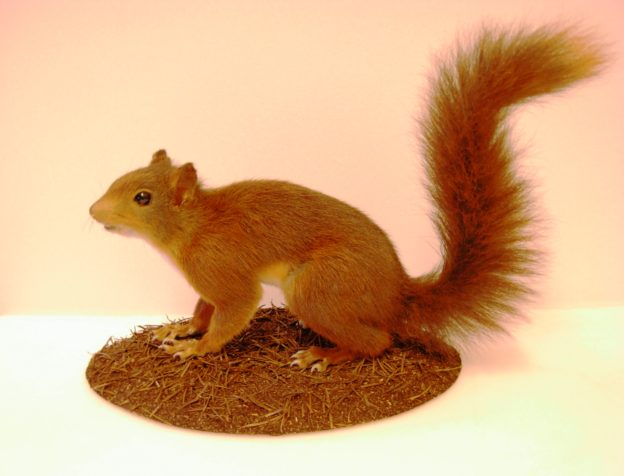 This red squirrel was found dead at Saffron Walden, Essex in August 2003. It had been run over by a car in Landscape View. A member of the Uttlesford group of Essex Wildlife Trust gave it to Saffron Walden Museum to be preserved. The body was mounted, or stuffed, by a taxidermist. This red squirrel has russet red fur on its body and tail, with white fur on its chest and belly. Male and female squirrels look identical.

The red squirrel is no longer native to Essex. They are very rare outside Scotland, Ireland and a few refuge areas in England and Wales. So what was it doing in Saffron Walden? This red squirrel had been released from a captive breeding and reintroduction programme which failed. Most people have not seen a live one, because grey squirrels have replaced our native red squirrels over most of Britain. American grey squirrels, Sciurus carolinensis, were originally from North America. They were released in Britain by nineteenth century landowners.

The introduction of the grey squirrel from North America caused red squirrel numbers to plummet. It is estimated that there are only 140,000 red squirrels left in Britain, with over 2.5 million greys squirrels. They cannot compete with the larger grey squirrels for food and shelter. Red squirrels also become infected with the squirrel pox virus which is carried the greys. Once infected, they die of starvation and dehydration within two weeks. Other threats include traffic and pets. To preserve red squirrels, they must be kept apart from grey squirrels as the two species cannot live together. Conservation agencies are working to develop a conservation strategy that deters grey squirrels and encourages reds.