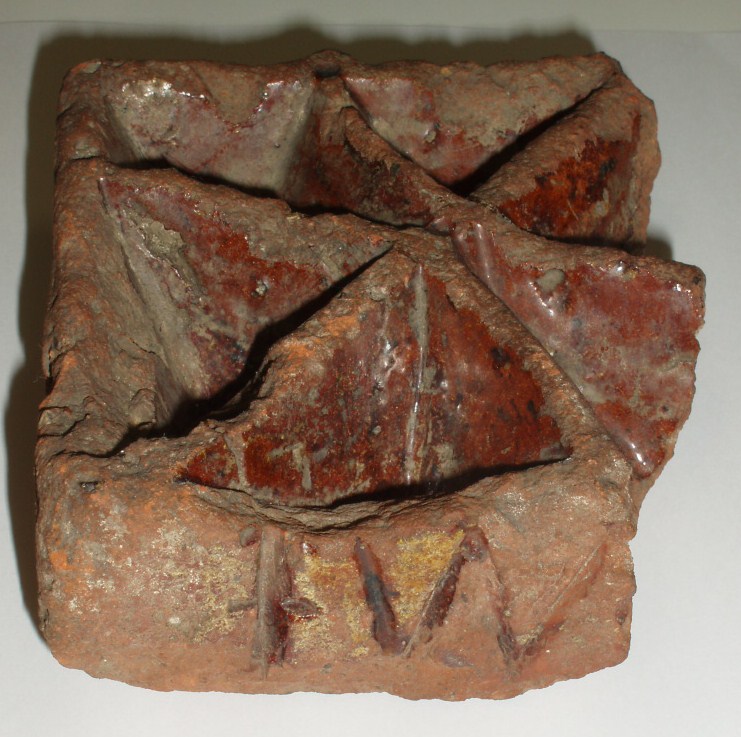 December’s Object of the Month is a pottery mould for making sweetmeats and dates to around 1600 – 1700 (Jacobean – Stuart period). It was in a box in the museum store with other odd bits of tile, mosaic and stone fragments, which had been collected by Victorian souvenir-hunters. A visiting researcher and archaeologist, Paul Drury, identified the mould when he came to study decorated medieval tiles in the museum’s collections. Curator Carolyn Wingfield chose it as Object of the Month, since Christmas is a time when modern equivalents of sweetmeats are popular!

Made by ‘I.W.’
The anonymous potter or brick maker who made this mould inscribed his initials IW on the side. The mould is made of fired earthenware, the sort of clay used for making everyday kitchen pottery and bricks. The upper surface is glazed and has triangular compartments for making small, pyramid-shaped sweetmeats. The mould is chipped and one side is broken away, but most of it is intact. 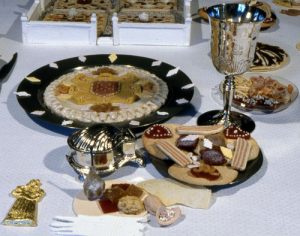 Sweetmeats and Moulds
Literally meaning ‘sweet food’, sweetmeat was a general term for all sorts of sugary, tasty delicacies. By the Tudor and Stuart period, these included candied fruits, quince paste, marmalades, suckets, gingerbread, marchpane (marzipan – almond paste) and all sorts of sweet, spiced pastries, cakes and biscuits. Honey had traditionally been used to sweeten foods, but as sugar became more available, so the fashion for sugared sweetmeats spread.

The tradition of baking decorated gingerbreads, cakes and sweetmeats for special occasions goes back to medieval times. Often they were made for religious festivals and saints days, and carved wooden moulds were often used for biscuits and gingerbreads.

Our earthenware mould is more utilitarian, and would have been used in the kitchen of a seventeenth-century house to make sweetmeats for fine dining at home. We would like to find out more about pottery sweetmeat moulds, so if you have any information on similar moulds, please email museum@uttlesford.gov.uk