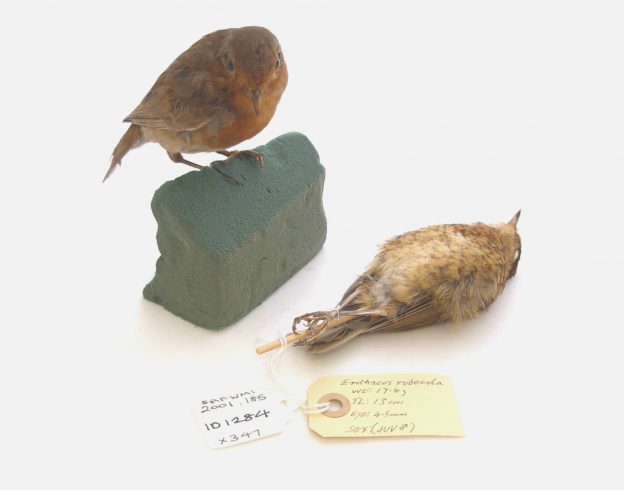 This adult female robin has the familiar red face and breast feathers. It is a mounted, or stuffed, bird specimen that was given to the museum during the 1800s. Male and female adult robins look identical. On display with her is the preserved skin of a young male robin whose feathers are brown with pale spots. Juvenile robins grow red feathers after their first moult. This young robin was found dead at Saffron Walden, Essex in August 2000. Study skins prepared like this are used for research in museums.

Robins
The European robin, Erithacus rubecula, is a member of the thrush family, so it is related to the blackbird and the nightingale. They live in woodland, hedgerows, parks and gardens. Robins from northern Europe may visit Britain during winter. These small song birds only live for a couple of years. Robins eat worms, snails, insects, spiders and seeds, berries and fruits.
Robins are often pictured in snowy scenes on Christmas cards. However, a robin can use up 10% of its body weight during a cold night. Unless a bird is able to feed well every day a prolonged cold spell can be fatal. Putting out food on bird tables can help robins to survive. They eat mealworms, scraps of meat, fat, cheese, cake and biscuit crumbs, dried fruit and crushed peanuts.

Territory
The robin is one of the few birds that hold a territory all year round for breeding and feeding. In summer a territory is defended by a male and female breeding pair. During winter each robin will hold an individual territory. Robins will always defend their territories from other robins. They sometimes fight to the death.

Song
Robins sing all year round because they need to defend their territories. They will also sing at night, usually under artificial street lighting, and are often mistaken for nightingales. The song is a rippling stream of crystal-clear notes with changes of speed and volume. An alarm call is a sharp “tic”, or repeated ticking “tic-ic-ic…”. 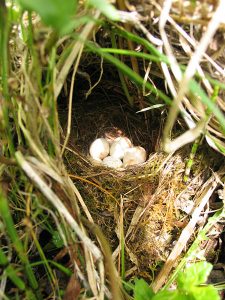 Robins normally start breeding in March. Males and females only pair up for a season. They nest on, or near, the ground in sites such as hollow in a bank or tree root, in climbing plants or in sheds. British robins prefer open-fronted nest boxes. A female builds a cup-shaped nest from moss and dead leaves, and then lines it with hair.
The female lays and incubates four to six eggs. The young leave the nest, called fledging, at 14 days old. Their parents look after them for up to three weeks. Most pairs of robins will try to raise three broods of chicks a year.

You can see the robins on display in the museum until 1 January 2018.