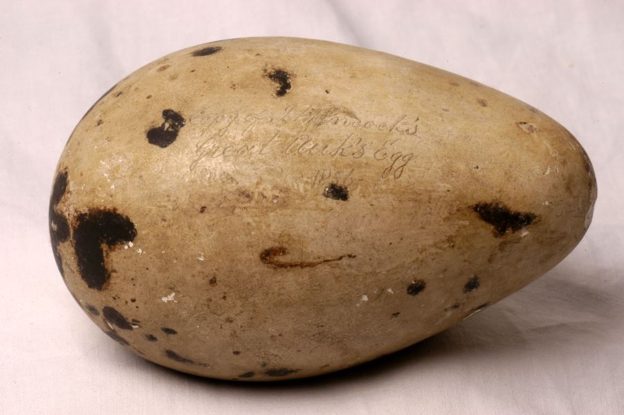 This plaster cast of a great auk egg was made in 1856. It is a copy of an egg that belonged to John Hancock, whose collection founded the Great North Museum in Newcastle upon Tyne. The egg, and the mould from which it was made, were given to Saffron Walden Museum by Mr William Murray Tuke of Hitchin, Hertfordshire in 1896. The inscription on the model egg reads: ‘Copy of J. Hancock’s Great Auk’s Egg Made Dec 1856’.

Making the Egg
A mould of John Hancock’s great auk egg was made first. The mould was then used to make a copy of the egg for Mr Tuke. The model egg was cast in plaster and two inscriptions engraved into the surface. Finally, the colour and markings were painted on to the model egg.

Great Auks
The great auk, Pinguinus impennis, was a flightless seabird that lived in the northern Atlantic Ocean. It was also called the gare fowl or garefowl. The black and white bird was about 75 centimetres long. Its wings were used for swimming under water, as they were only 15 centimetres long. 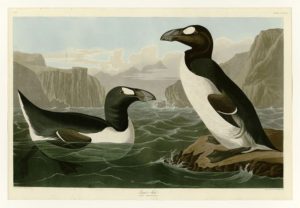 Great auks bred in colonies on rocky islands around the coasts of the north Atlantic Ocean, such as St. Kilda, the Faroe Islands, Iceland and Funk Island off Newfoundland. Each breeding pair mated for life. They laid a single egg on bare rock. It was about 12.5 centimetres long. Sailors and island people hunted the defenceless birds for their meat, feathers, fat, oil and eggs. When the last birds were killed in 1844 on Eldey Island off the coast of Iceland, the great auk became extinct.

Mounted specimens of the birds, their bones and eggs are preserved in museums. Saffron Walden Museum has a plaster copy of a skull in the Hessisches Landesmuseum at Darmstadt, Germany and copies of great auk eggs in the collections of Sir Walter Calverley Trevelyan of Wallington Hall, Northumberland and Mr Troughton of Coventry.

You can see the model egg on display in the museum until 28 February 2018, and discover more about the mould from which the egg was made and John Hancock, the famous taxidermist.