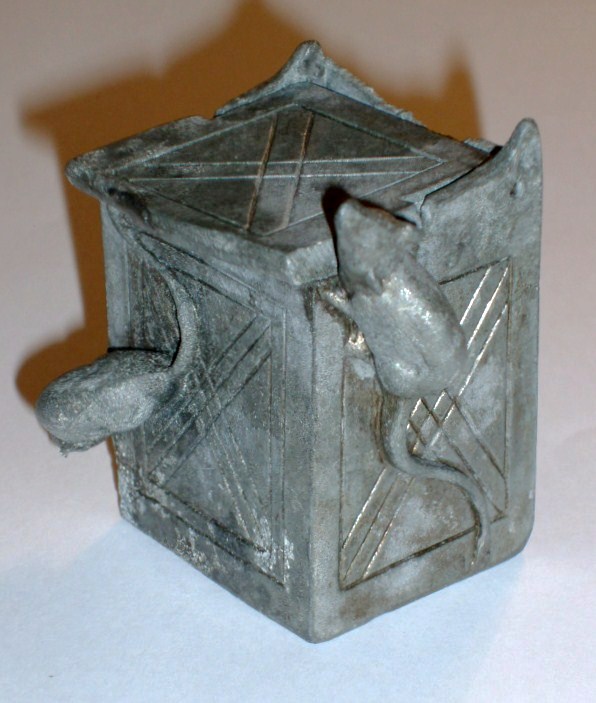 January’s Object of the Month is a metal box, said to have held salt. This curious metal box, decorated with two little mice, has been in the museum’s collections since 1898.  It was probably made in the middle of the 19th century (about 1850-1870). We are not completely sure what the box was used for so Carolyn Wingfield, Curator, and Stefan Shambrook, Security & Premises Officer, investigated… 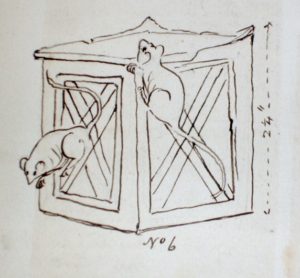 Entry in the accession register

Examining its construction
Next, Carolyn and Stefan looked at the construction of the box to see if that held any clues. The metal from which the box is made is spelter, an alloy of zinc with a little lead. Spelter was cheaper than pewter and was widely used from around 1860 onwards to make cheap, cast domestic items and ornaments. The box was made in several stages.

The sides and bottom were cast as separate pieces which were soldered together by hand. The lid was then fitted.

The geometric decoration on the box is quite crude but the mice are quite finely made by comparison, and could have been the work of another craftsman. The mice were cast separately and then skilfully soldered onto the box. The decoration only appears on three sides and the back of the box is plain, which suggests it was made to hang or stand against a wall. The box appears to be a one-off, whimsical piece and not a mass-produced object.

Historic Salt Containers
The accession register suggests that the box was a salt box so can looking at other historic salt containers confirm this? Throughout history, salt has been an important and valuable substance for preserving and flavouring food. From medieval times onwards, special containers have been used for keeping salt and for putting it on the table. 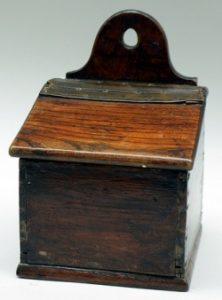 Wooden salt box in the collections of Leeds Museums & Galleries

Salts and Salt Cellars were small containers for salt on the dining table. These could range from simple miniature pottery dishes to elaborate pewter or silver pieces. Wealthy households would have a highly-decorated salt on their table. Salts and salt cellars were designed for display and to be seen from all sides.

Salt Boxes were usually larger, more humble and practical, for use in the kitchen. They were commonly made of wood, and also of pottery or pewter. Many were plain and some were decorated, but all had a tall back projecting above the lid, with a hole at the top for hanging on a hook or nail. Salt boxes were hung on the wall by the stove or fireplace, where the salt granules would be kept dry. This stopped the salt from forming into lumps. Salt boxes were typically around 15 – 20 cms wide, considerably larger than our small box, which is just under 5cms wide.If you look closely at the Museum’s box, the top edge of the back plate behind the lid is uneven and looks as though it has broken. It may have been designed for hanging on a wall originally, before it was damaged.

Our conclusions
The box may well have been made as a miniature salt box for hanging on a wall. The patterns on the sides and lid are similar to simple designs engraved on some traditional wooden salt boxes, so maybe the maker was copying an older model.

However, the small size and fanciful addition of the mice suggest that our box was probably never intended for serious, practical use. It might have been a personal gift or just made for fun. After the back plate broke, it could have been used as a salt cellar standing on the table, as the accession register suggests. Alternatively, the box could have held small quantities of other substances such as spices, or small trinkets.

If you have seen any other boxes like this, or have any other suggestions or comments, we’d love to hear from you! Email us, or comment on our Facebook or Twitter pages. You can see our box on display in the museum until 31 January.