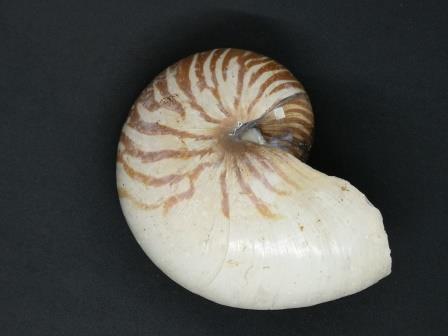 January’s ‘Object of the Month’ features a Nautilus shell from oceans on the other side of the world. It has been chosen by Sarah Kenyon, one of the Natural Sciences Officers, at Saffron Walden Museum. 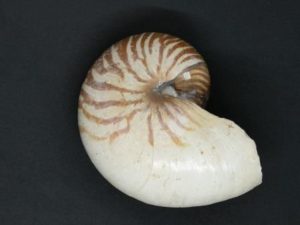 This is the shell of a Chambered Nautilus, Nautilus pompilius, a marine mollusc also called the Pearly Nautilus. They are the only living Cephalopods with an external shell. The spiral shell is divided into chambers that are connected to each other by a hollow tube called the siphuncle. The animal lives in the newest and largest outer chamber at the end of the shell. The older chambers are filled with gas and fluid. Buoyancy can be controlled by changing the amounts of gas and fluid inside the chambers of the shell and so the Nautilus can move up or down in sea water from shallow to deeper depths. It swims using jet propulsion. The animal uses its tentacles to catch prey, which it eats with a hard parrot-like beak and a radula with teeth. They were once common in seas across the world. Today only a few Nautilus species live in the Indian and Pacific Oceans around southeast Asia and Australia. They are now protected by international law.

The Nautilus shell was collected during the nineteenth century, between 1800 and 1899. It will be on display all month in the Natural History gallery. To find out more about the Nautilus and other Cephalopods (Squid, Octopus and Cuttlefish) visit the Museum in January. In the Geology gallery you can also see the fossils of two extinct groups of Cephalopods, the ammonites and belemnites, which were common in the sea until they became extinct at the end of the Cretaceous period 65 million years ago. You can find fossils of ammonite shells and the internal guards of belemnites (similar to the squids of today).