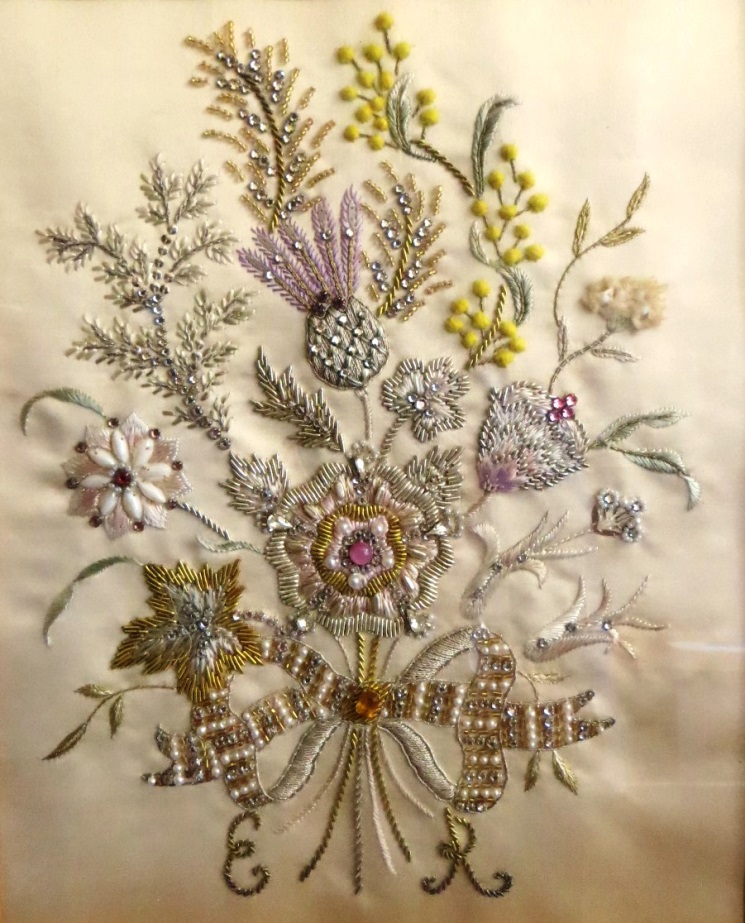 June’s Object of the Month is a framed sample of the material used to make Queen Elizabeth II’s coronation dress. Elizabeth’s coronation took place on 2 June 1953 at Westminster Abbey in London.

The sample was a gift from Norman Hartnell, the designer of the dress, to Miss Grizelle Fowler. Miss Fowler bequeathed it to the museum in 2016. The sample was chosen as Object of the Month by Leah Mellors, Collections Officer (Human History), to coincide with Queen Elizabeth II’s official 90th birthday in June 2016. 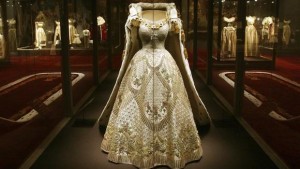 Queen Elizabeth II’s coronation gown, on display in an exhibition at Buckingham Palace

Queen Elizabeth II’s coronation dress was designed by Norman Hartnell, who also designed her wedding dress. Elizabeth ordered the dress in October 1952 and it took eight months of research, design and workmanship to create it. Hartnell put forward eight different designs and Elizabeth chose her favourite. It then took at least three dressmakers, six embroiderers and the Royal School of Needlework to create the detailed embroidery.

The dress is made from satin. It has an embroidered design, featuring some of the national flowers and plants of Britain and the countries of the Commonwealth. These include the English Tudor rose, the Scottish thistle, the Welsh leek, the Irish shamrock, the Canadian maple leaf and the New Zealand silver fern. Hartnell secretly added in an extra four-leaf shamrock on the left-hand side of her dress as a symbol of good luck. The design is completed in seed pearls, crystals, coloured silks and gold and silver thread. 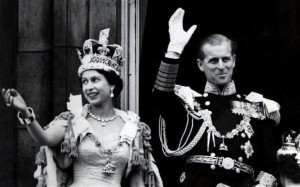 Queen Elizabeth II and Prince Philip on the balcony at Buckingham Palace, following her coronation.

Elizabeth ascended to the throne, aged 25, when her father George VI died on 6 February 1952. Her coronation took place more than a year later because it was seen to be inappropriate to celebrate a coronation during a period of mourning.

The coronation of Queen Elizabeth II was the first coronation to be shown on television. The Prime Minister, Winston Churchill, was against the idea but Elizabeth refused his advice and insisted that the event be televised. Sales of television sets soared in the weeks leading up to the coronation.

Around 8000 guests from across the Commonwealth countries were invited to the ceremony in Westminster Abbey. Before the ceremony, the guests passed through the streets of London in a procession, in front of about three million spectators. More than 20 million more people watched on television.

Elizabeth arrived at Westminster Abbey at 11am. During the ceremony, she swore the Coronation Oath, promising to govern each of her countries according to their laws and customs, to carry out law and justice with mercy, to uphold Protestantism in the United Kingdom and to protect the Church of England. Following this, there was a communion service, before each of the bishops and peers of the United Kingdom swore allegiance to the new Queen. When the last baron had done this, the assembly shouted:

Queen Elizabeth was then transported back to Buckingham Palace in the Gold State Coach, with an escort of thousands of military personnel from around the Commonwealth. She appeared on the balcony of the Palace in front of the crowds, as a flypast went overhead.

You can see the sample on display in the museum until 30 June 2016.