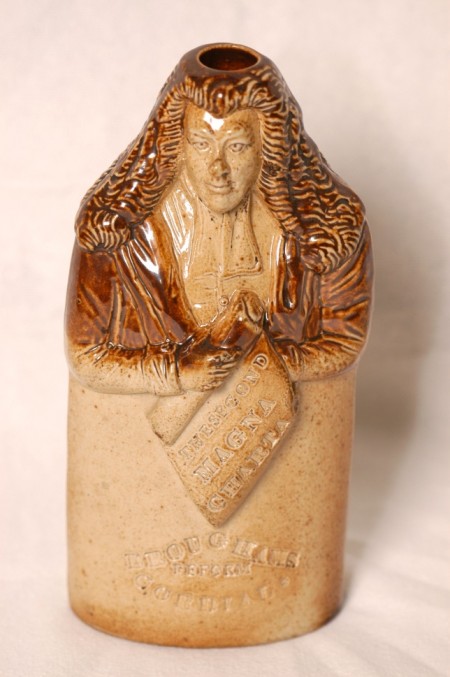 March’s Object of the Month is a flask or bottle made from salt-glazed stoneware. It is shaped in the form of Henry Peter Brougham, who was Lord Chancellor of Britain between 1830 and 1834. The inscription on the front of the flask reads:

The flask was made by Belper and Denby Bournes Potteries, Derbyshire, in 1832 and it is marked on the back with their maker’s mark.

The flask was donated to the museum in 1897 by Edward Taylor of Saffron Walden. 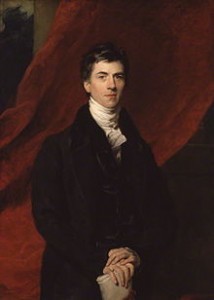 Henry Peter Brougham, 1st Baron of Brougham and Vaux, was a British politician and statesman. He was born in 1778 and died in 1868.

Brougham began his career as a lawyer in Scotland, before entering the House of Commons in London in 1810. He was appointed as one of the chief advisors of Caroline of Brunswick, the estranged wife of the future George IV, in 1812 and he became her Attorney-General in 1820.

Brougham was a Member of Parliament for Winchelsea from 1816 until 1830, when he was appointed Lord Chancellor of Britain by Prime Minister Charles Grey. He held this post for four years. During this time, he helped to pass the 1832 Reform Act and the Slavery Abolition Act in 1833. He was devoted to the anti-slavery cause throughout his life.

The bottle commemorates Brougham’s role in helping to pass the 1832 Reform Act.

The Representation of the People Act 1832 (known informally as the 1832 Reform Act), was an act of Parliament that introduced changes to the voting system in England and Wales.

The Act was proposed by the Whigs, a political party led by the Prime Minister Charles Grey. It was heavily opposed by the Pittite factions of the Conservative party but the Act was eventually passed, mainly because of widespread public pressure and unrest.
Traditionally, Members of Parliament represented boroughs and the choice of members was often controlled by one wealthy and powerful patron. For example, Charles Howard, 11th Duke of Norfolk, controlled 11 boroughs. The number of voters in each borough varied widely, as did the criteria for voting. Boroughs with a small number of voters that were controlled by a wealthy patron were known as “rotten boroughs”.

Extract from the manuscript of the Act

The 1832 Reform Act removed seats from these “rotten boroughs” and created 67 new constituencies, many in the large cities that had sprung up during the Industrial Revolution. It also broadened the criteria for voting, giving the vote to all householders who paid a yearly rental of £10 or more. This increased the electorate to about one in five adult males.

The 1832 Reform Act did little to appease the working classes or women, who were still unable to vote. However, it did prove that change was possible and over the next decades, the call for further parliamentary reform continued.

You can see the flask on display in the museum until 31 March 2016.