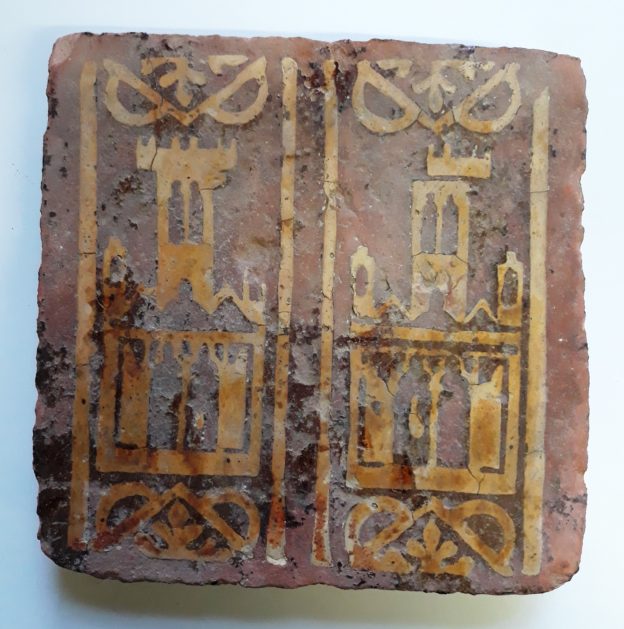 Knights on the Tiles

Saffron Walden Museum’s Object of the Month for March features a sample of luxury flooring from the late Middle Ages. Decorated tiles of fired clay were hard-wearing, and were an attractive and practical way of embellishing a special building or room. At first, elaborate tiled floors were the preserve of royalty, aristocracy and the great cathedrals and abbeys. The industry seems to have expanded in the fourteenth century as demand spread and decorated tile floors became within the reach of wealthy merchants, landed gentry and local churches.

There were many styles of decorative tile flooring; the tiles in Saffron Walden Museum’s collections illustrate the most popular late medieval technique, inlaid or ‘encaustic’ tiles. Plain slabs of red clay were stamped with a wooden block which had a pattern carved into it, so that the pattern was lightly impressed into the surface of the clay. The sunken pattern was then filled with white clay, trimmed and coated with a lead glaze. When fired in a kiln, the lead glaze made the tile appear red-brown with a yellow pattern.

The Museum’s collection includes 19 medieval floor tiles with inlaid design, though some are worn or incomplete. They were acquired in the period 1870-80, from local antiquarians or private collectors as far as we know, however the records made at the time are not as detailed as we would like, with only a vague reference to where some of the tiles came from. Fortunately, archaeologists’ knowledge of the medieval tile industry has increased greatly during the past 150 years thanks to excavations and research, so it is now possible to say where many of the tiles were made, even if we do not know the place where the tiled floor was laid. A recent research visit by Paul Drury FSA, who is an authority on medieval tiles, has provided us with much more information on the Museum’s small collection of medieval tiles. The three tiles featured here have been chosen for display in the Museum during March ,and can be found in a small case on the first floor level of the Great Hall gallery.

1 Tile with castle design, made near Winchester, Hampshire

Impressive tile, of larger than usual size, was made in the Winchester area, possibly from Otterbourne (a village south of the city) where there are records of a tilery providing tiles to Winchester roundabout 1400. The Museum’s register entry states that this tile came from Winchester.

2 Tile made at Chertsey, Surrey

3 Tile made at Penn, Buckinghamshire

The village of Penn was the location for a large tile-making industry in the fourteenth century. Penn supplied tiles beyond Buckinghamshire to north-west Essex and south Cambridgeshire; examples of Penn tiles have been recorded at churches in Saffron Walden, the Chesterfords and Little Shelford.

Tile displays the monogram (interlinked initials) of a merchant John Baret, who lived in Bury St Edmunds from the 1390s to 1467. The same monogram design was used to decorate the ceiling of his chantry chapel in the church of St Mary, Bury St Edmunds. A similar JB tile was found at Rattlesden in Suffolk and it si possible that our tile came from a site near Saffron Walden. The John Baret tile may also have been made locally, as it belongs to s group of tiles found along the border of north Essex, south Cambridgeshire and south Suffolk.