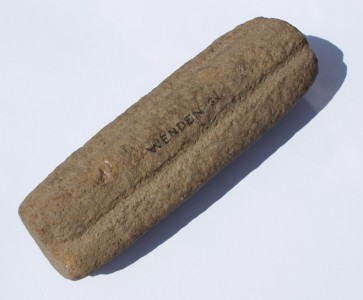 In 1903, some men digging gravel on the south side of the village of Wendens Ambo, near Saffron Walden, made a remarkable discovery. Between about 3000 and 4000 years ago, Bronze Age people had used that area to bury their dead, cremating the bodies and burying the ashes in large hand-made pots or ‘cremation urns’. The diggers had unearthed pieces of an urn, together with this implement of shaped and grooved sandstone, approximately 19 cm long.

The pottery urn that the gravel-diggers found was not unusual, as many similar urns have been found across Britain. The stone object, however, was unlike anything archaeologists had ever seen. It was shown to many leading archaeologists of the day and fully published in 1916 by a noted scholar, Miller Christy, but no one could come up with a convincing explanation. Over 100 years later, it continues to baffle everyone. 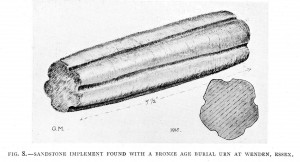 Drawing of the stone object from ‘A Guide to the Departments of Archaeology and Ethnology in the Saffron Walden Museum‘, published in 1916.

What Was It For?

These are some of the suggestions made:

A pounder or a pestle?

Probably not, as the ends show no signs of the wear that would be expected.

Again, probably not, as the sides show no signs of wear and why would they be grooved?

The grooves do not show the wear that would result from this and there are better ways of sharpening arrow heads or smoothing arrow-shafts.

Is it the head of a club, do the grooves allow it to be lashed to a handle?

That would have been an awkward way of mounting a club-head!

Is it a roller for breaking or ‘braying’ flax or other vegetable fibres?

Possibly – we know that Bronze Age people spun and wove flax and wool but we need more practical evidence.

Does it have a ‘religious’ or ‘ceremonial’ use, now lost to us?

Possibly, though such explanations are often given by archaeologists when they don’t really know! However, there are other Bronze Age burials that contain apparently ‘ritual’ objects, such as small decorated chalk cylinders. We do not know how our Bronze Age ancestors regarded these objects.

Is it a more recent object, which had somehow got buried near the urn?

The stone object was found actually touching the urn in the burial pit and there was no sign of later disturbance or animal burrows. Also, no historical or modern objects like this are known.

What do you think? Is it a practical tool, a ‘sacred’ object or a ‘stone loofah’?

Why not let us know what you think it is by tweeting us @SW_Museum or leaving a comment on our Facebook page.