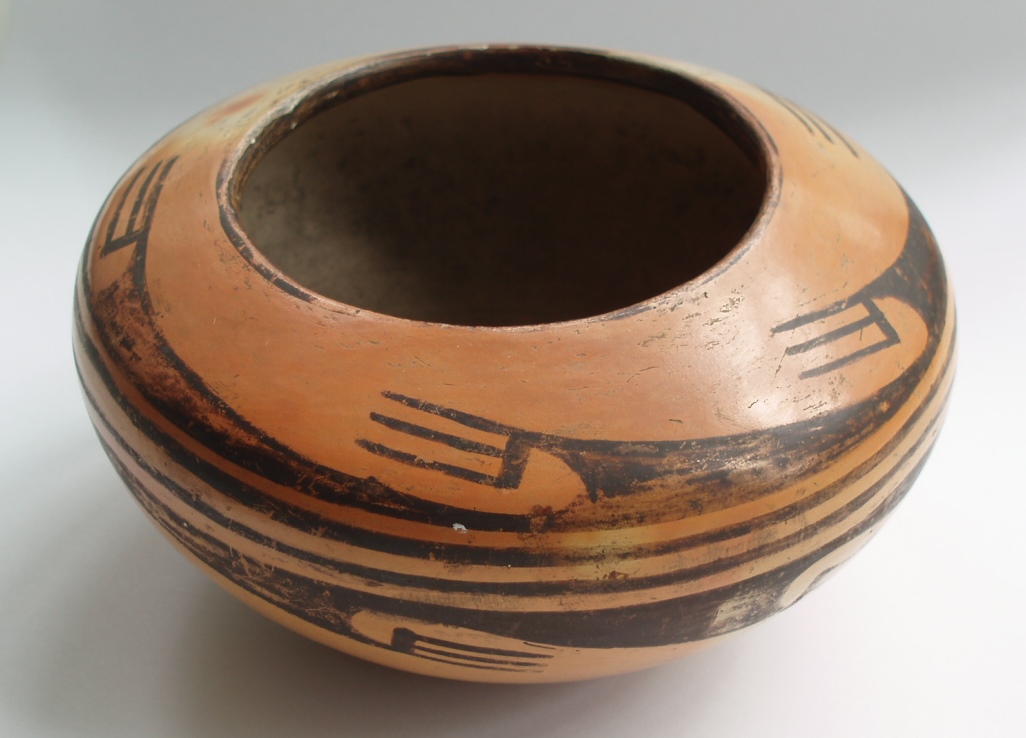 May’s Object of the Month is a pottery bowl made by an unknown potter of the Hopi people of North America in the early twentieth century. It was chosen as Object of the Month by Carolyn Wingfield, Curator. Although we have no records of where the pot came from or who gave it to the museum, its distinctive style links it to a fascinating story about the village of Sikyatki and the modern revival of traditional Hopi pottery.

The surface of the pot has been polished to make it smooth and shiny, and the decoration has been painted using mineral pigments. The design of black bands with paw-like feet encircling the pot is typical of Hopi patterns which draw on animals, birds and nature.

Ancient Hopi pottery and Sikyatki village
The Hopi tribe are a Native America Nation living in what is today north-eastern Arizona, USA. Their name Hopitu means ‘The Peaceful People’. When the Spanish first came to the Americas in the 1500s, they referred to the Hopi and other cultures in the region as Pueblo people because they lived in villages (pueblos in the Spanish language). 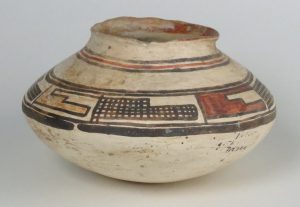 One of these villages, Sikyatki – meaning ‘Yellow House’ – gave its name to a distinctive style of pottery produced by the Hopi from the 1300s to the 1600s. They made bowls, ladles and jars in yellow-orange clay, painted with black, red and white mineral pigments. Designs were based on animals and birds, such as heads, beaks, wings and feathers, and other patterns derived from the natural world.

Sikyatki itself was probably abandoned between 1500 and 1600, before Spanish colonisers reached the area. According to Hopi tradition Sikyatki was burned by people from the neighbouring village of Walpi in a feud.

Nampeyo and ‘Sikyatki Revival Style’
The revival of traditional Hopi pottery was started by the work of the Native American potter Nampeyo. She was a Hopi-Tewa woman, born in the village of Hano in 1859. Much of her early life was spent in the village of Walpi with her grandmother, who taught her the art of pot-making.

Nampeyo quickly became known for her skill in designing, shaping and decorating pots. By the 1890s Nampeyo was incorporating traditional Hopi designs into her pottery. She drew her inspiration from sherds of ancient Sikyatki pottery which she and her husband Lesso collected. Further stimulation came from pots found at Sikyatki in 1895 by Jesse Walter Fewkes, on an excavation funded by the Smithsonian institution. 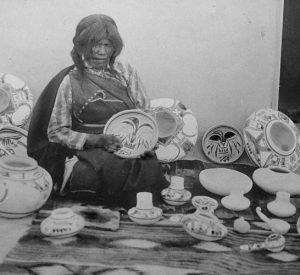 Nampeyo with examples of her work, 1900

Nampeyo continued to experiment with clays and designs, and began to teach other women, as well as members of her own family. The designs she created both revised and preserved the symbols of Hopi culture. This extended beyond the pots themselves to the rituals and ceremonies involved in making pottery, and prayers to Mother Clay. The demand for Sikyatki Revival Style pottery among collectors and tourists was also important in ensuring the Hopi’s economic survival.

The term ‘Sikyatki Revival Style’ was coined to describe the pottery produced by Nampeyo and other potters, such as Maria Martinez. Nampeyo died in 1942 but potters continued working in the Sikyatki Revival Style through the twentieth century. Despite influences from the outside world, the Hopi have retained their own culture, language and religion to this day.