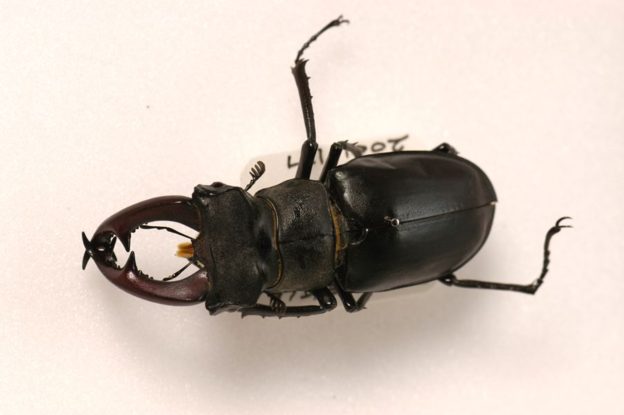 May’s Object of the Month is a Stag Beetle.

This male stag beetle was found dead on the Recreation Ground at Great Dunmow, Essex in May 1999. It was handed in to the police station at Dunmow, and a Police Wildlife Liaison Officer gave it to Saffron Walden Museum to be preserved.

The stag beetle, Lucanus cervus, is the largest beetle in Britain. They prefer areas with low rainfall, high air temperatures and light soils, so stag beetles are widespread in southern England, especially the Thames valley, north Essex, south Suffolk, south Hampshire and west Sussex. They are also found in the Severn valley, coastal areas of the southwest, and a few areas in Devon and Worcestershire. They live in hedgerows, parks, gardens and in the edges of woodlands.

Adult males are up to 75 mm long. They have large antler-like jaws, or mandibles, which are used for wrestling with other males during the breeding season. 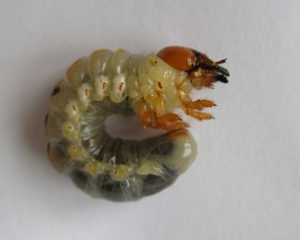 The stag beetle has a long life cycle. Three to seven years are spent underground in the larval stage. Larvae are large white grubs, with orange heads, that can be up to 11 cm long. When it is time to change into an adult, a larva builds an oval shaped cocoon in the soil up to 20 cm below ground. Cocoons can be as large as an orange and may take up to three weeks to build. Within the cocoon the larva becomes a pupa and finally changes, or metamorphoses, into an adult. An adult stag beetle emerges from its cocoon in the autumn, then it spends the winter and spring in the soil.

Adult beetles usually emerge from the soil from mid May onwards. Males can be seen flying at dusk looking for a mate. Male beetles use their antlers to wrestle other males when competing for a female beetle. 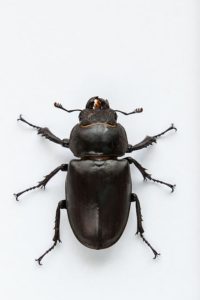 Females are often seen on the ground looking for somewhere to lay their eggs. They lay small, round eggs below ground near to rotting wood in log piles, tree stumps and old fence posts. Female beetles prefer to dig down into light soil to bury their eggs, and newly emerging adults have to find their way to the surface.  Very few stag beetles are found in hard, chalky areas like the North and South Downs.

By the end of August most stag beetles will have died after mating. They do not survive the winter.

You can see this stag beetle on display in the museum until 31 May 2018. You can also find out how you can encourage stag beetles to live in your garden!