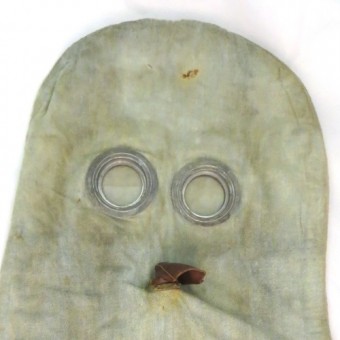 November’s Object of the Month is a P Helmet or PH Helmet. It was chosen by Leah Mellors, Collections Officer (Human History). The helmet was issued to the donor, E. H. Langhorn, in the trenches during World War I. It was designed to protect him from gases, such as tear gas, chlorine gas and phosgene, which were used to disable, injure and kill soldiers. 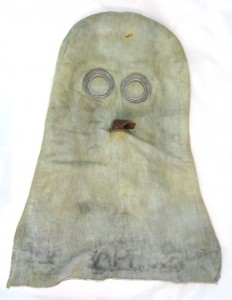 The helmet is made from a double-layer of flannel, which was treated with chemicals to protect the soldier from gas. It was designed to be tucked into the neck of the tunic. It has a mouthpiece with a non-return valve, which meant that the soldier could breathe out but air and gas could not be breathed in.

Gas masks in World War I

Gas masks were provided for soldiers from 1914 in response to the use of poison gas. Early gas masks were very basic because the first gas attacks were a surprise. Nobody expected poison gas to be used as a weapon because it was considered to be a war crime. It violated the 1899 Hague Declaration Concerning Asphyxiating Gases and the 1907 Hague Convention on Land Warfare, which banned the use of poison weapons in war. 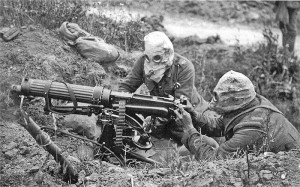 of gas mask was designed to protect against tear gas and it consisted of a pad of material tied over the face, with a pair of gas goggles to protect the eyes. When chlorine gas began to be used in 1915, the H Helmet was introduced. This was a fabric helmet treated with sodium hyposulphate, which neutralised chlorine gas.

The P Helmet was introduced in July 1915. It had two layers of flannel treated with sodium phenolate to protect against phosgene and chlorine. In January 1916, hexamethylene tetramine, which protected against hydrocyanic acid, was added. This was known as the PH helmet. P Helmets and PH Helmets look very similar and it is not always possible to tell them apart. 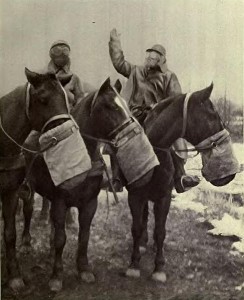 In 1917, box respirators were introduced and used for the remainder of the war. They consisted of a mouthpiece connected to a box filter by a hose. The filter contained granules of chemicals to neutralise the gas.

Gas masks were also developed for animals that played vital roles in the war, such as horses, dogs and carrier pigeons.

The use of poison gas had profound physical and psychological effects on soldiers.
Tear gas – Tear gas caused irritation to the eyes and the upper respiratory tract, causing severe tears, coughing and choking.

Phosgene – Phosgene caused suffocation. It also irritated the skin, eyes, nose, throat, and lungs. Phosgene was the most deadly gas to be used, being responsible for 85% of the 100,000 deaths caused by chemical weapons during World War I.

Chlorine gas – Chlorine gas reacted quickly with water in the airways and formed hydrochloric acid, which swelled and blocked the lung tissue, causing choking and suffocation. Chlorine was also a powerful psychological weapon because it formed distinctive green clouds that could be seen approaching.

Mustard gas – Mustard gas had a very painful effect on soldiers, causing blisters on the skin, very sore eyes, vomiting, and internal and external bleeding. It also attacked the lungs.

A common effect of chlorine and mustard gas was temporary gas blindness. This painting, entitled Gassed, by John Singer Sargent shows soldiers affected by gas blindness, leading one another to a hospital tent.

Only 4% of combat deaths during World War I were caused by gas, because of the introduction of gas masks. In total, between April 1915 and November 1918, 5981 British troops were killed by poison gas and 180,539 were injured.

You can see the P or PH Helmet on display in the museum until 30 November 2015.