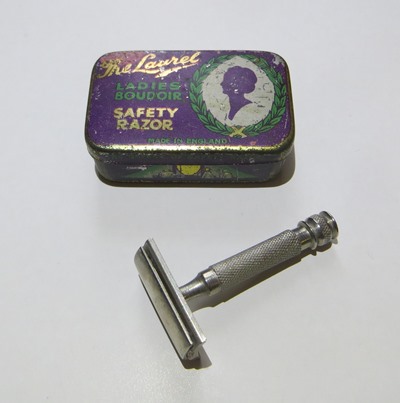 November’s Object of the Month is this tiny razor, called the Laurel Ladies Boudoir Safety Razor. It was made in Sheffield between 1935 and 1940 by a company called G H Lawrence Ltd. The razor was donated to the museum last month and belonged to the donor’s mother. It is only 4cm in length and the blade is just 2cm wide. 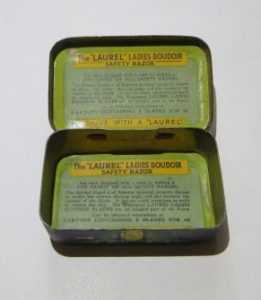 Inside the tin, there is a label which reads:
The “LAUREL” LADIES BOUDOIR SAFETY RAZOR has been designed with a view to making it THE SAFEST OF ALL SAFETY RAZORS.

The Slotted Guard is of Bakelite material properly shaped to secure the correct shaving angle, and also protects the corners of the Blade. It has no comb serrations or teeth to irritate the skin. The Registered LAUREL LADIES BOUDOIR BLADES are an integral part of the Razor.

Can be obtained everywhere in
CARTONS CONTAINING 6 BLADES FOR 6d

SHAVE WITH A “LAUREL”

Female beauty in the twentieth century

The early twentieth century saw a new emphasis on personal grooming and beauty products for women. It has been suggested that this was a result of the shortage of marriageable men following World War I – women felt they needed to look good to secure a husband. But it was also partly a result of the new fashions. In contrast to Victorian and Edwardian women who had covered up with long sleeves and full skirts, women were now showing more skin. 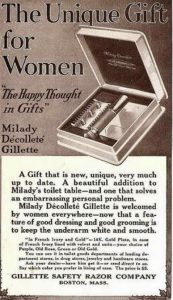 One of the companies that benefitted from this change was Gillette, who produced the first razor for women in 1916, called the Milady Décolleté. By the 1920s, tiny boxed razors were to be found in almost every bathroom cabinet, along with hair-removal creams and powders.

Magazines in the 1920s were full of adverts for products claiming to make skin beautiful, such as creams, treatments and razors. These adverts can tell us a lot about how women were perceived at the time. In 1922 an advert in the magazine Harper’s Bazaar focused on body hair as an embarrassment, encouraging women to “have immaculate underarms if she is not to be embarrassed”.  In 1924 an advert for Veet hair removal cream stated that “nothing is so repellent and disillusioning as hair growth on the arms of a woman”.

During the 1920s, most women covered their legs with stockings and by the 1930s, hemlines had dropped back down to the ankle or floor, so shaving and hair removal was focused on the underarms. However, during World War II, the shortage of nylon meant many women were forced to go bare-legged and as a result, more and more hair removal products were sold and shaving your legs became an expected norm. 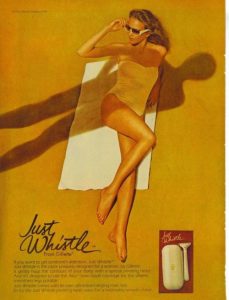 Throughout the remainder of the twentieth century, companies continued to market hair removal products at women, appealing to their desire to be feminine or attempting to make them feel ashamed of their body hair. By the 1970s, shaving had become widely accepted so companies focused on a closer or faster shave. In the 1980s, advertisers returned to the theme of women making themselves attractive to men, as seen in this advertisement, showing a man’s shadow across a woman and the phrase “If you want to get someone’s attention, just Whistle”.

Today, there is more conversation about the personal choice not to remove body hair, but adverts still aim to convince women that hair removal is an important way to look and feel glamorous and to be sexually appealing.

You can see the razor on display in the museum until 30 November 2017.