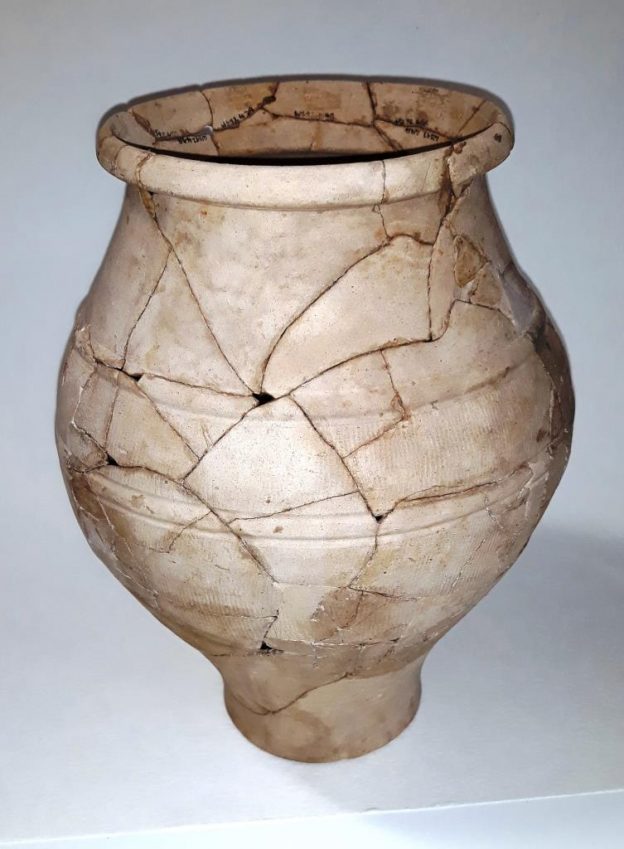 Our Object of the Month for November has been chosen by Carolyn Wingfield, Curator. It is a late Iron Age beaker, imported from Gaul (France) and buried with its owner around the time of the Roman conquest of Britain in AD 43.

Beakers like this were the fashionable drinking vessels of the day for wine or beer. This beaker is 26 cms tall and is 20 cms across at its widest point. Its capacity is roughly 4 litres or 7 pints. Vessels like this may have been passed round at a feast or ceremony, so that does not necessarily represent one person’s intake of drink!

Discovery of an Iron Age Community

In 1992, archaeologists discovered traces of an Iron Age settlement to the east of Bishop’s Stortford, in Birchanger parish. Excavations took place before the area was developed as Woodside Industrial Park. They found sherds of pottery, animal bones and features in the soil which showed that a small community was living there in the early and mid Iron Age, from around 700 BC to 100 BC.

There then seems to have been a break in occupation for at least a hundred years, until the early 1st century AD, shortly before the Roman invasion of AD 43. Around that time, an important member of the local Iron Age community died and was cremated. Their burial with pottery and other grave goods was the outstanding find of the excavation.

Occupation of the site lasted into the early Roman period until about AD 150.

To prepare for the burial, the Iron Age community dug a large circular pit, a little over a metre in diameter. In this they placed eight pottery vessels (including this beaker), four bronze brooches, a leg of pork and a pig’s head, cut in two length-ways. It is likely that some of the pots held other food and drink to complete the feast for the afterlife. The ashes of the dead may have been placed in a cloth bag or wooden container which did not survive. Analysis of the cremated bone remains indicated that one individual, probably an adult, was buried.

The bronze brooches were all common types used to fasten clothes in the late Iron Age and early Roman period. They were in poor and incomplete condition so cannot be displayed, but the illustrations below are of similar brooches.

The pottery can tell us much about the status of the person buried. The number of pots in the burial (eight) suggests that this was a fairly wealthy person. Also, they owned fine pottery imported from abroad and probably only available to higher-ranking people in Iron Age society.

This beaker is of fine white sandy clay and was made in north Gaul (France). The burial also included another beaker, red in colour, from Gaul. There were strong links between the late Iron Age peoples of Gaul and south-east Britain, as attested by many archaeological finds such as pottery and coins, and by Roman writers. The pots also included a platter and a cup, both made locally but copying the style of imported wares from Gaul.

The other four pots on the burial – a flagon, a cup, a second platter and a small jar – were all types of local pot known from the Essex – Hertfordshire region.

See the full report of the excavation at Birchanger “Iron Age and Roman material from Birchanger, near Bishop’s Stortford; excavations at Woodside Industrial Park, 1992” by Maria Medlycott, published in Essex Archaeology and History volume 25 (1994), pages 28 – 45.

The finds and records from this site are held by Saffron Walden Museum and can be studied by appointment (access subject to Covid 19 regulations).

The Gibson Library (formerly Saffron Walden Town Library) is an excellent resource for local history and archaeology publications. For information on how to use the Gibson Library visit their website https://gibsonlibrary.org.uk 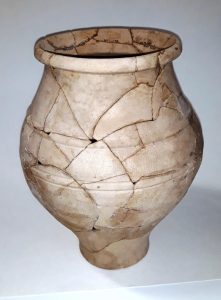