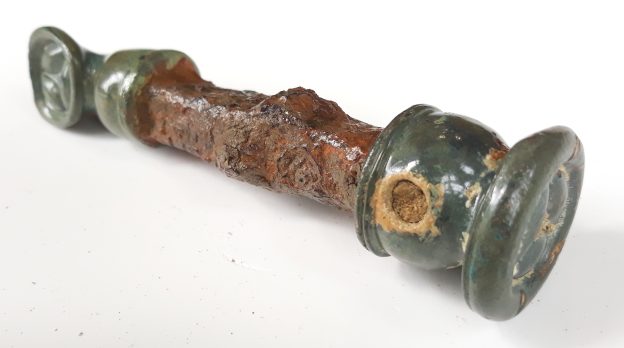 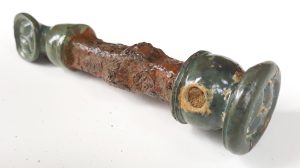 November’s Object of the Month is a bronze and iron lynch pin from an Iron Age chariot wheel, chosen by our Curator Carolyn Wingfield.  It is at least 2,000 years old and was found in Radwinter parish by local detectorist James Patmore, who has kindly loaned it to the Museum.

This lynch pin is far more than just a functional piece of metalwork from a horse-drawn cart; it is a beautifully cast and decorated piece of late Iron Age bronze work and was made for the chariot of an ancient British warrior.

The lynch pin keeps the hub of a wheel in place. In Britain, there is evidence for the use of horses and wheeled vehicles from the Bronze Age, but the use of horses in warfare seems to have developed among the warrior class of Iron Age society. Their mastery of lightweight, two-wheeled chariots, drawn by a pair of native ponies, was described and admired by Julius Caesar, in his campaigns in Britain of 55 and 54 BC:

“In chariot fighting the Britons begin by driving all over the field, hurling javelins, and generally the terror inspired by the horses and the noise of the wheels are sufficient to throw their opponents’ ranks into disorder….even on a steep incline they are able to control the horses at full gallop, and to check and turn them in a moment”.

(Julia Caesar, The Conquest of Gaul, translated by S A Handford, 1951, Penguin Classics)

Some chariot lynch pins have enamel inlay surviving, as on another example on display in the Museum, though this lynch pin, acquired in the 19th century, has one end missing and no record of where it came from. Iron Age lynch pins like these are found occasionally across Britain, and are thought to date from around 300 BC to AD 100. So the Radwinter lynch pin is a very welcome addition to the displays. Who knows, maybe its owner was fighting during Caeser’s campaigns, or the Roman invasion of AD 43, or even Boudicca’s revolt of AD 60-61?