October’s Object of the Month is a mechanical calculator made by Muldivo, which probably dates from the 1930s or 1940s. It was chosen by Vicky Geddes, Digital Engagement Intern. The calculator was donated to the museum in 1982.

Mechanical calculators used a series of gears and pinwheels to calculate sums, and were popular through the nineteenth and twentieth centuries, until the electronic calculator became more affordable.

The first designs for mechanical calculators, also known as pinwheel calculators, came from Germany in the 1600s. The first person to build a pinwheel calculator was Giovanni Poleni in 1709, but on hearing that German Antonius Braun had designed his own calculator and dedicated it to Emperor Charles VI in Vienna (which he would later build and present to the Emperor in 1727), Poleni destroyed his.

For three centuries various people across Europe and America designed and built pinwheel calculators. The first one to be mass produced was Odhner’s Arithometer in 1890, which became the most popular design in Europe. The design that the Muldivo follows first emerged in 1850, and remained popular until the 1970s.

Many companies were set up across Europe to produce clones of Odhner’s machine, resulting in its huge popularity. Even those companies not simply cloning Odhner often used aspects of his design as inspiration, including Muldivo, and as a result many of the mechanical calculators produced in the twentieth century look remarkably similar to one another.

Pinwheel calculators have metal wheels (pinwheels), which are assembled into a cylinder called a rotor. The pinwheels have nine pins sticking out of them. The number of pins sticking out from the pinwheel can be changed by moving a setting lever and this selects the number you want to add/subtract/multiply/divide. 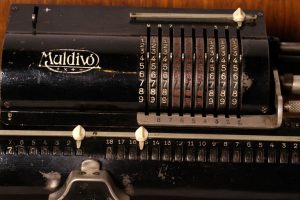 A closer view of the Muldivo calculator. Visible here are the setting levers, which choose the numbers which will be used.

Muldivo was founded in London in 1912. The company grew and expanded in the first half of the twentieth century, moving to various locations around London. Muldivo bought various companies that produced mechanical calculators, and acted mostly as the British distributor for their products.

However the company did produce a few mechanical calculator models of its own. The first Muldivo brand calculator was produced in France, and introduced in 1924. All subsequent models were produced in Germany, and they usually followed a similar design to a product made by one of the other companies Muldivo owned.

In 1939, Muldivo bought Guy’s Calculating Machines – another British manufacturer of pinwheel calculators. In 1965, Guy’s moved to Witham in Essex, giving Muldivo a stronger footing in the county.

The company continued to grow in success and size through the twentieth century up until the 1960s. By the 1970s, the popularity of electronic calculators had pushed Muldivo out of business, and the company closed its doors in 1971.

You can see the Muldivo calculator on display in the museum until 31 October.