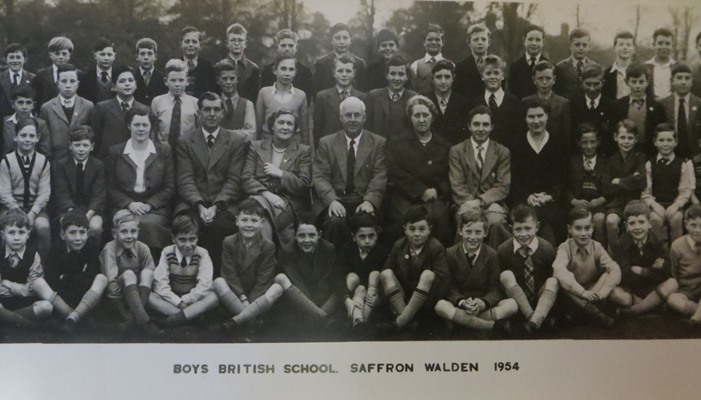 The photograph was chosen as Object of the Month by Leah Mellors, Collections Officer (Human History), in the hope that we may be able to identify some of the pupils.

The Boys’ British School was opened in 1838. It was situated on East 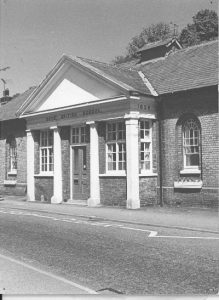 Street in Saffron Walden. A girls’ school was also opened at the same time on South Road.

The creation of the Boys’ British School was decided on at a meeting in Saffron Walden Town Hall on 26 July 1838. Those present at the meeting decided that the town needed better education facilities, especially for the poorer classes.

They decided that the school should follow the model of the British and Foreign School Society. The school would be open to children of all religious denominations, from the ages of seven to 14. Parents would pay 2d per week for each boy.

The Gibson family provided the building on East Street for the school, rent-free, and William Jenkines was appointed the first headmaster.

Timeline of the Boys’ British School

1847               The school formally affiliates with the British and Foreign School Society, so that it can receive government grants. Jenkines, the Headmaster, opposes this affiliation and resigns. He is replaced by Edwin Chennell.

1869               The school is inspected by Matthew Arnold, who says “the school is full…and the discipline is excellent. Nearly the whole average attendance are presented for examination…the papers are worked in fair style”.

1876               The number of pupils reaches 230 and the inspector’s report for that year remarks that “discipline suffers through crowded rooms”. Numbers drop off and in 1878, the inspector reports that “the school is in excellent order”.

1914               Following the outbreak of World War I, the school premises are used to accommodate over 100 soldiers. Teaching is moved to the Abbey Lane Congregational Chapel.

1918               At the end of World War I, 75 previous students of the school have lost their lives. They are commemorated on a roll of honour (now held in the museum’s collection, pictured right).

1920s             The school flourishes under Headmaster Charles Heaven. Don Purkiss, a former student, describes Mr Heaven as putting “the fear of God…into most of us”.

1939-1945     World War II causes an increase in the number of pupils, as evacuees and boys from the nearby RAF Debden station enrol. Teacher Miss Foster describes the school as “bursting at the seams”.

The British and Foreign School Society

The British and Foreign School Society was established in 1808, to carry on the work of Joseph Lancaster. Lancaster was a Quaker who reformed school and educational systems and promoted education for the poorer classes. He introduced a non-sectarian approach to teaching, meaning that teachers could not teach particular denominational beliefs. He also introduced the use of rewards as well as punishments and a system of monitors where older students taught younger students.

Joseph Lancaster’s system of education was based around two principles:

All children worked at the same time. Older boys were used as monitors, who ruled the books, ensured good behaviour and reported on attendance and progress. 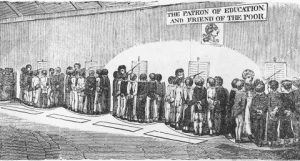 The boys in the first class sat nearest to the teacher. They sat at a flat table that had a sand tray in which they could draw letters.  Once they had mastered the sand trays, they progressed to slates.

Reading stations were established around the walls. Students stood at these stations in order of merit and were taught by the monitors at reading boards, which were attached to the walls.

Students progressed from class to class once their lessons had been learned.

You can see the photograph on display in the museum until 30 September. If you were a pupil or teacher at the Boys’ British School, get in touch and tell us your memories!