Over the past few weeks, the museum has been celebrating and commemorating the 1000th anniversary of the Battle of Assandun. In 1016, the Anglo-Saxons fought the Danes (Vikings), under their leader Cnut, at a place called Assandun in Essex. Cnut was victorious and soon after the battle he became king of all England. 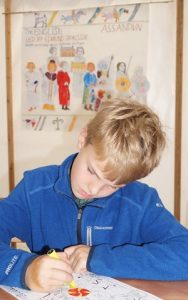 Historians have argued for centuries about the battle site – was it Ashdon near Saffron Walden or Ashington in south-east Essex? There are good reasons to consider Ashdon and Hadstock as the area where the battle was fought and where Cnut built a church in 1020 to commemorate those who fell at the battle.

To celebrate this historic event, we have been running a series of activities and events over the summer. In August, we ran family craft activities in the museum to make Saxon or Viking helmets and shields and we asked our visitors to help us create a battle mural, in the style of the Bayeaux tapestry.

On Friday 9 September, pupils at Ashdon Primary School got a taste of Viking times when four re-enactors from Regia Anglorum and museum staff and volunteers set up a special session at the school. Regia Anglorum members introduced them to life and crafts a thousand years ago and the museum brought along a special display of local Saxon and Viking finds.

On Saturday 10 September, battle commenced at Waltons Park, Ashdon, as members of Regia Anglorum brought Saxon and Viking times to life before enthusiastic crowds. Over 800 people came to see the commemoration of the battle and a living history camp. There were special demonstrations of 11th century horsemanship and a Viking ‘boat burial’. At the museum’s activity tables in the marquee, young warriors had a chance to dress as a Viking, make shields or helmets and handle real and replica objects. There was a great atmosphere on the day, despite the typical English weather!

If you want to find out more about the battle, why not come along to the Saffron Walden Museum Society evening talk on Monday 10 October at 8pm, where Patricia Croxton-Smith will be talking about King Cnut and the Battle of Assandun.