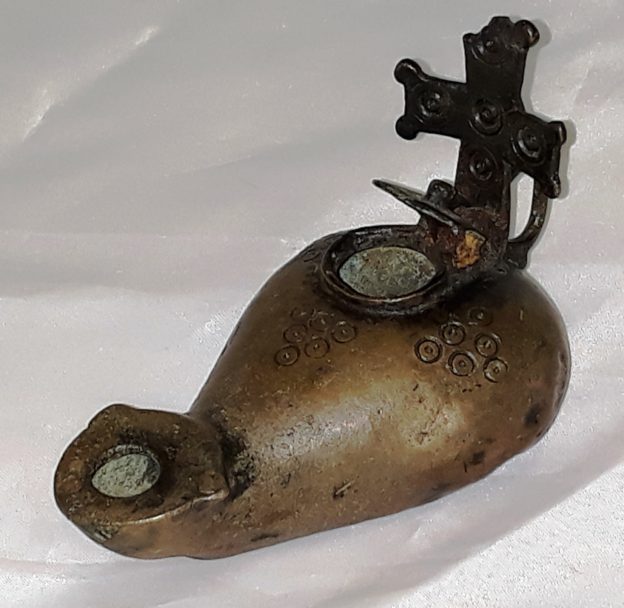 March’s Object of the Month is an ancient bronze oil lamp recently donated to Saffron Walden Museum. Olive oil would have been poured into the lamp through the hole which has a hinged lid. The spout at the front was for the wick. There is a small loop for carrying or hanging the lamp on the back of the cross, which rises from the hinge attachment.  Both the cross and the top of the lamp are decorated with engraved ‘ring and dot’ patterns.

The lamp was found in the Saffron Walden area along with pieces of glass bottles and china jars – a typical Victorian household rubbish dump! A rabbit had burrowed into the dump, bringing some of the rubbish to light, including the lamp.

The lamp however is much older, probably nearly 1,500 years old. It dates from the time of the Byzantine Empire, and was made somewhere in the east Mediterranean region, probably the Near East or Egypt, around 500-800 AD. The cross is a Christian symbol. Christianity was the official religion of the Byzantine (or Eastern Roman) Empire, and its capital was Constantinople, also known in the ancient world as Byzantium and today as Istanbul.

We do not know how and when the lamp travelled to north-west Essex, but can make a guess. Classical antiquities like this were popular souvenirs for gentlemen taking the Grand Tour in the 18th and 19th centuries. The lamp may have been such a souvenir, but discarded later in the 19th century in a house clear-out, or perhaps after its owner died.