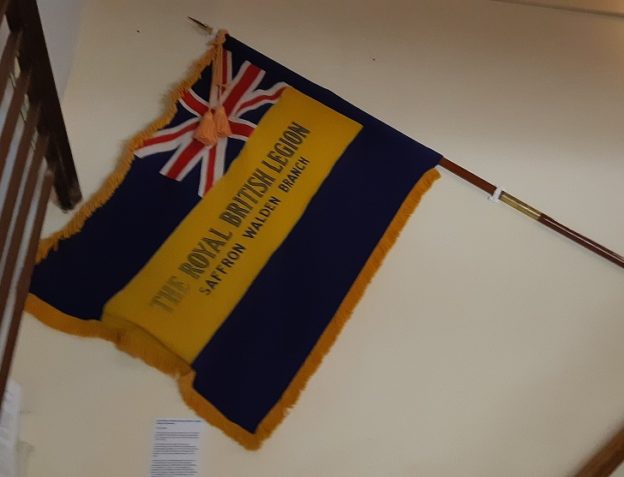 To mark the commemoration of the Centenary of the end of the First World War (1914-1918), November’s Object of the Month is a poignant one.

The Royal British Legion is a charity which provides financial, social and emotional care and support to members and veterans of the British Armed Forces, their families and dependants. The Legion is also the national Custodian of Remembrance and safeguards the Military Covenant between the nation and its Armed Forces and is best known for the annual Poppy Appeal and its emblem the red poppy.  Founded in 1921, the Legion is not just about those who fought in the two World Wars of the last century, but also about those involved in the many conflicts since 1945 and those who are still fighting for the freedom we enjoy today.

The 2nd Saffron Walden Royal British Legion Branch Standard was first sworn in at the Eastern Area Golden Jubilee Rally, to celebrate the 50th anniversary of the British Legion on the 26th June 1971 at Newmarket’s July Racecourse.

Over the years it has featured at many local, national and international events, helping to commemorate those who have given military service. It has featured at annual carol services, the Festival of Remembrance at the Albert Hall, the Last Royal Tournament at Earls Court in 1999 and many times for Burma Star Association events, Poppy Race Days at Newmarket Racecourse, and HMS Lapwing Association parades.  It took pride of place at the 80th Anniversary of the Saffron Walden Branch celebrations and played a key role in the 60th Anniversary of the end of the Second World War (1939-1945) commemorations in 2005.

Parading these standards for many years, can leave them liable to damage as they feature detailed embroidery and brocade, so new ones are established and sworn in, when this is the case. The retired 2nd Standard has now been donated to the Museum, and features as our Object of the Month for November, whilst a new 3rd standard has been sworn in.  On Sunday 11th November, the new standard will form part of the town’s annual Remembrance Sunday Parade and Church service

For more information on the Saffron Walden branch of the Royal British Legion  http://branches.britishlegion.org.uk/branches/saffron-walden 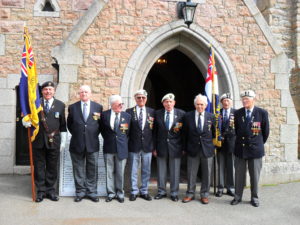 The Standard is on display at the Museum until the 1st December, where you can learn more about this object, the role played by the Royal British Legion and the Centenary of the end of the First World War.