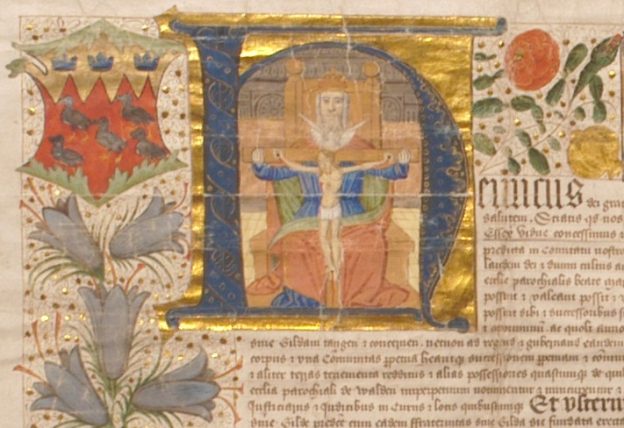 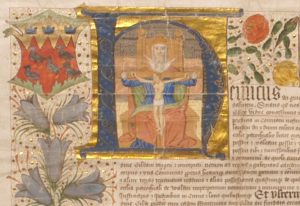 This beautiful illuminated 1514 Charter can be seen on display in the museum’s Local History gallery.

When Henry VII came to the throne in 1485, he introduced charges for traders, brewers and bakers in
Saffron Walden. The townspeople were not happy about this, as people went elsewhere to sell their goods.

In 1513, a group of townspeople, led by John Leche and his sister Dame Joan Bradbury, petitioned Henry VIII to withdraw these charges but he refused.

The group then devised a plan to form a religious guild in the name of Katherine Semar, a wealthy widow in the town who wanted to leave money for a chantry in her will. They petitioned the king for the right to form this guild.

The petition was successful and on 24 March 1514, Henry VIII granted a charter allowing the Guild of the Holy Trinity to be formed.

The charter allowed the guild to hold land to the value of 20 marks without paying the normal charges and to act as a body in court.

Two months later, on 12 May 1514, Henry VIII granted a second charter to the guild.

The second charter allowed the guild to run the town’s market, a windmill and a malt mill and to keep the profits from them all. This meant that the townspeople no longer paid charges to the king.  In return Henry VIII demanded £10 per year.

The charter is hand-written in Latin onto parchment and it is decorated with gold leaf and illustrations, including:

Saint Ursula: Saint Ursula can be seen sheltering her companions with her cloak. The guild was connected with Saint Ursula because they celebrated a four-day fair at the time of her feast-day.

Saint Katherine: Saint Katherine, who can be seen with her wheel at the top of the charter,
represents Katherine of Aragon, Henry VIII’s wife at the time. One of the responsibilities of the guild was to pray for the souls of Henry and Katherine.

Katherine Semar: The figure on the right of the charter is probably Katherine Semar. The guild was formed using the money that Katherine left in her will for a chantry. 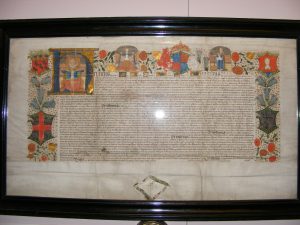