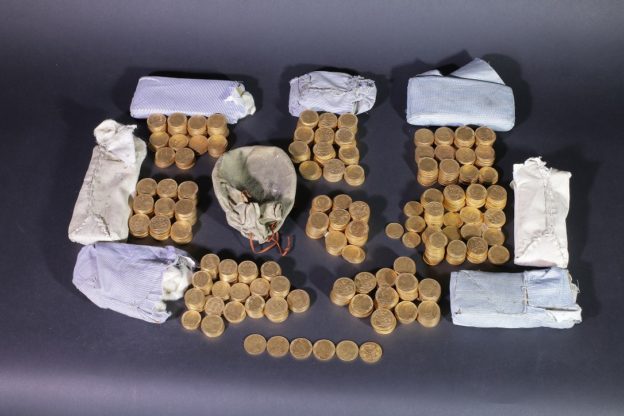 In 2017, 913 gold sovereign and half-sovereign coins were discovered in Shropshire, hidden inside a piano. So what is the link with Saffron Walden? How have we acquired such a fascinating assemblage of material? The piano was originally supplied by Beaven & Mothersole Piano Tuners, who were based in 27 West Road, Saffron Walden. Receipts show that they had purchased the piano direct from the London manufacturers, Broadwood & Sons Ltd in 1906.

It was only when the piano was professionally tuned, that the coins were finally discovered, nestled between the keys and the keyboard.

In 1983, the piano was bought by the Hemmings family, residents of Saffron Walden. They owned the piano for 33 years, before moving to Shropshire and gifting it to their local college, The Community College, Bishop’s Castle, completely unaware of what was hidden inside.

Research has shown that the coins found date to between 1847 and 1915; so they originate from the reigns of Queen Victoria, King Edward VII and King George V.

It is likely that they were concealed within the piano by a Saffron Walden resident. Some of the cardboard packaging in the pouches, which encased the coins, were taken from Shredded Wheat cereal boxes.

The style of the packaging suggests that the coins were concealed around the time of the Great Depression, when there was great economic hardship across the world.

When the coins were discovered, they were declared treasure under the Treasure Act 1996, as they were gold coins which were deliberately hidden and no rightful heirs could be traced. At the time of its discovery, this hoard of modern gold coins was the largest of its type.

We are delighted that a representative sample of twelve of the gold coins from the hoard, as well as their packaging and the piano in which they were hidden, have now been acquired by the Museum, as a result of a crowd-funding campaign and generous donations from individuals, as well as the Saffron Walden Round Table and Butler Smith Carriers. This fascinating mystery has captured many people’s imaginations, having received local, regional and national news coverage and it is fantastic to see it going on display in the Museum.  The display will be formally launched at the Museum on Friday 30th November. 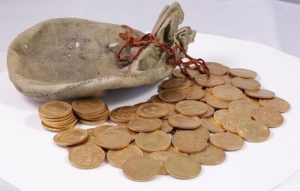 The piano and a representative sample of the hoard will be on display in the Great Hall of the Museum in December, and then the display will be transferred to the Local History Gallery.

Here’s a sound clip of the piano hoard piano being played by Gail Ford at the launch of the display on 30th November 2018: 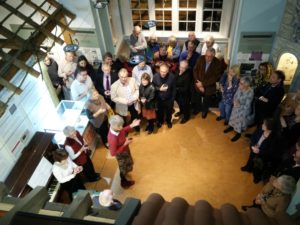