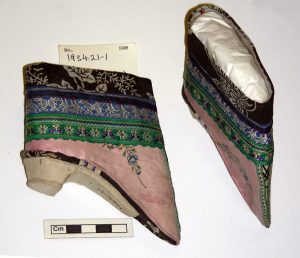 Foot-binding was a traditional practice that originated in 10th century China, among court dancers and high society women. By the 12th century it was a widespread practice. In the early 19th century it was estimated that five to eight women out of every ten in China (taking into account regional variations) had bound feet. It eventually spread through all social classes and while it was outlawed in 1912, it continued in some rural areas for years afterwards. A census taken in 1928 in rural Shanxi found that 18% of women had bound feet, while in some remote rural areas such as the Yunnan Province, foot-binding continued to be practiced until the 1950s. In most parts of China, the practice had virtually disappeared by 1949. In 1999, the last lotus shoe-making factory closed.

The museum has around 14 pairs of Chinese lotus shoes associated with foot binding. They typically have wedge heels, pointed upturned toes which extend beyond the sole and stiffened ankles. The embroidered uppers of the shoes have been beautifully crafted in silk and metallic threads, with embellishments – usually gold braid, beading and sequins. 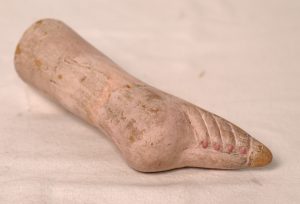 The foot-binding practice involved plunging the feet into hot water and massaging them with oil. Then all the toes, except for the big ones, were broken and bound flat against the sole, to produce a triangular shape. The arch of the foot was strained as the foot was bent double. The feet were bound in place using a silk strip measuring 10ft long and 2 inches wide. These wrappings were briefly removed every 2 days to prevent blood and pus from infecting the foot. Sometimes “excess” flesh was cut away or encouraged to rot. Over time the wrappings became tighter and the shoes became smaller as the heel and sole were crushed together. After 2 years the process was complete and the feet were most probably numb, with a deep cleft in the sole that could hold a coin in place. Once a foot had been crushed and bound, the shape could not be reversed without undergoing the same pain all over again. This practice was usually undertaken on the feet of a young girl, aged between 3 and 11 years, as their feet would have been softer and easier to manipulate. It was usually carried out by the child’s grandmother.

This painful practice was associated with beauty, status and marriage eligibility. Having tiny feet was considered sexually attractive, emphasising a masculine Chinese view at that time of a woman’s inferiority and weakness.  It was believed that girls who had their feet bound would be able to attract better marriage offers because of their tiny feet. In wealthy families, the feet of all the daughters would have been bound but in poorer families, the practice might only have been carried out on the eldest daughter, as they had the best chance of making a good marriage union. The ideal length of the foot – the “golden lotus” was deemed to be just three inches.