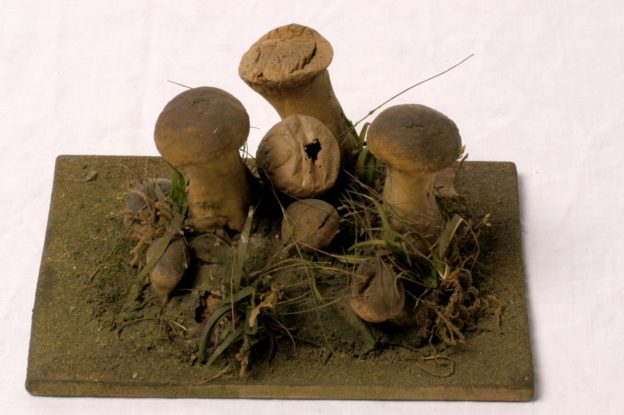 September’s Object of the Month is a wax model of Pestle Puffball fungus, Handkea excipuliformis, found growing under Scots pine trees on a road to Newport, Essex by George Maynard between 1880 and 1904.

This common fungus can be seen from August to November. It grows in woods, grassland, heaths and on waste ground. The fungus is 8 to 20 cm tall. It is white at first and turns brown as it ages. Initially it is covered in soft, pointed warts which all fall off to leave a smooth surface. The upper, rounded section, 3 to 12 cm across, is the head which contains the spores. The lower, straight section is the stem which soon develops a wrinkled skin.

This puffball is edible when it is young and white, if the tough outer skin is removed. However, the older yellow, olive and brown fungi and stems can still be found in winter and summer and should not be eaten. You need an expert to identify edible fungi as mistakes can easily be made.

George Nathan Maynard was the first curator of Saffron Walden Museum. He was born in 1829 in the village of Whittlesford, Cambridgeshire. From a young age he showed a great interest in natural sciences, including botany, entomology and geology. George inherited his father’s shop but had to sell it in 1873. The family moved to Lambeth in London where he worked as a printer and his wife Elizabeth was a dressmaker. In 1880 he was employed as the first paid curator of Saffron Walden Museum. 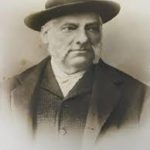 As curator he reorganised the museum displays, recorded objects in accession registers and carried out conservation work to preserve the collections. During this time he made a collection of models in wax, modelled from fungus specimens collected in Saffron Walden, Newport, Debden and Little Chesterford.

In 1904 George died of respiratory problems at the age of 75. His son Guy took over as curator until 1920 when he left to become curator of Ipswich Museum.

Want to know more about mushrooms and other fungi?

Wildlife organisations lead fungus forays in the countryside with experts who can help you to discover the fascinating world of fungi, and which ones are edible and which ones to avoid!