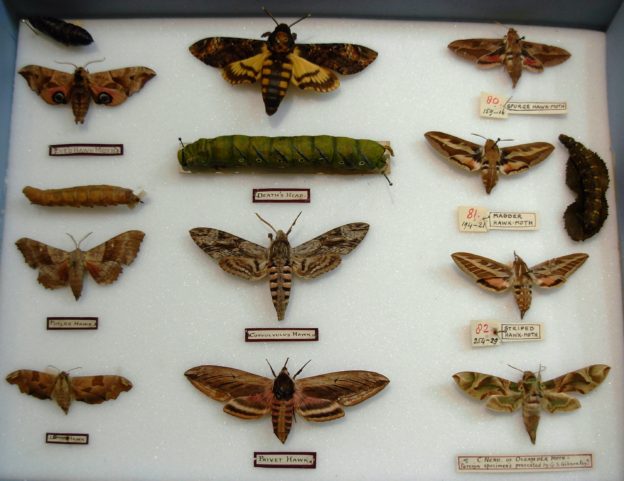 May’s ‘Object of the Month’ features a selection of Hawk-moths. They have been chosen by Sarah Kenyon, one of the Natural Sciences Officers at Saffron Walden Museum, from moths preserved in a wooden cabinet of British moths. It belonged to George Stacey Gibson of Saffron Walden who collected the insects before 1883. 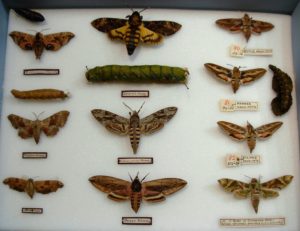 In the left column at the top you can see an Eyed Hawk-moth with a pupa, the black and blue eye spots on its hind wings are used to scare predators. Below that is a Poplar Hawk-moth with its caterpillar that feeds on poplar tree leaves and, at the bottom, a Lime Hawk-moth. Its large, bright green caterpillar eats the leaves of lime, silver birch and elm trees.

In the centre you can find a Death’s-head Hawk-moth and its caterpillar which eats Potato and Deadly Nightshade plants. This moth is a migrant visitor to Britain between August and October. It squeaks when alarmed and is recognised by a skull marking on the back of its chest (thorax). Below that is a Convolvulus Hawk-moth, and at the bottom, a Privet Hawk-moth one of our largest moths found in gardens.

These large moths of the insect family Sphingidae are beautiful and easy to identify. So they are great for budding lepidopterists. Nine species breed in Britain and eight visit as migrants including Death’s-Head, Convolvulus, Spurge, Bedstraw, Striped, Oleander and Hummingbird hawk-moths. Different hawk-moth species can be found from May to December in gardens, parks, woods or allotments. Some fly at night and are attracted to lights or they can be found resting on tree trunks and on leaves of the plants their caterpillars eat. Others such as the Hummingbird Hawk-moth drink nectar from flowers with a long tube called a proboscis. 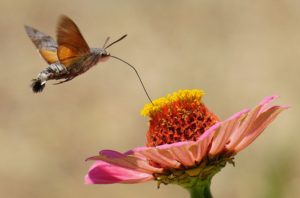 You might find a pupa when digging in your garden or allotment. This is the hard case a caterpillar forms when it changes into an adult moth, in a process called metamorphosis. Some pupae can move as a defence mechanism. This happened when I was identifying one and it shocked me so much that I dropped it!

Please bury a pupa again if you find one.

Check out these websites to help you learn more about Hawk-moths and how to identify them.

The Essex Field Club website has maps showing where each moth species has been found in Essex www.essexfieldclub.org.uk/portal/p/Species+account/s/Mimas+tiliae Select ‘next species’ on this page to move to the next moth or search for hawk-moth on the website.

If you really get the bug you could join the Essex Moth Group www.essexfieldclub.org.uk/portal/p/Essex+Moth+Group

Unfortunately this is a virtual Object of the Month during this difficult time.  However, when the Museum is open again you will be able to see these hawkmoths on display upstairs in the natural history gallery. 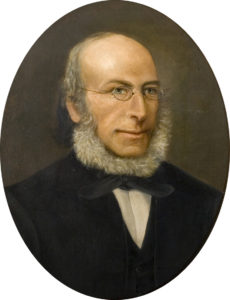 The Gibson family were wealthy Quakers who made their money from land, banking, brewing and public houses, including the Sun Inn. George was born in 1818, the son of Wyatt George Gibson and his wife Deborah, who was from the Stacey family. Wyatt Gibson built the Boys’ British School and left £5,000 for the building of a hospital (now the Uttlesford District Council offices). His brother Francis laid out Bridge End Gardens and his other brother Jabez sank a deep well in 1835 so that Saffron Walden had a clean water supply.

George Stacey Gibson was a naturalist, banker and benefactor to the Saffron Walden area. As a young man he made many excursions into the countryside, keeping field notes of plants and starting a herbarium, which is a collection of dried, pressed plants mounted on sheets of paper, and sometimes bound into in a book, with descriptions of when and where they were found. When he produced his work on the species of plants to be found around Saffron Walden he had recorded 588. In 1862 George published the first Flora of Essex at a cost of 6/-. It remained the standard reference work for a century comprising common and rare plants growing in Essex, some of which had not been discovered before. There are original copies in the Town Library. He also collected Red Crag fossils from the cliffs at Walton-on-the-Naze and purchased minerals and rocks to form his geology collection.

In 1845 George married Elizabeth Tuke and they moved to Hill House at the south end of the High Street. A blue plaque identifies this house. He laid out 11 acres of different gardens around the house and employed the services of William Chater a Saffron Walden nurseryman. A summerhouse was built onnd the corner of what is now Margaret Way and you can still see some boulders which were part of his collection. In the summer there would be Open Days when the public were invited in. There was an Anglo-Saxon cemetery in the back garden of Hill House and George organised an excavation in 1876.

Now the town had fresh water the family disposed of most of their brewing interests. A family partnership had started Saffron Walden & North Essex Bank in 1824. George entered the partnership in 1839. He brought his brother-in-law, William Murray Tuke, into the bank which was renamed Gibson, Tuke & Gibson. New premises were built in the Market Place and it became part of Barclays in 1896.

He played a huge part in public life serving on Saffron Walden Town Council from 1859 until his death in 1883. George was mayor for two years from 1875 to 1877. He was also a Justice of the Peace and vice-chairman of the Board of Guardians that administered the Poor Law and the workhouse. He was instrumental in bringing the railway to Saffron Walden in 1865 because of the economic benefits it could bring. He was active in the society that formed the Library and was involved in the reorganisation of Saffron Walden Museum. Gibson was a regular benefactor to Saffron Walden and the surrounding parishes. He and his mother paid for the drinking fountain in 1863. Gibson also oversaw the construction of the Town Hall and funded an extension which opened in 1879. He followed family tradition by supporting the Boys’ British School, the hospital, expanding the almshouses and founding a small orphanage. He donated land for a school and was influential in the relocation of the Friends’ School from Croydon to Saffron Walden in 1879.

After he died his beneficiaries included the hospital, library, schools, almshouses, orphanage, Society of Friends and Saffron Walden Museum. During his life and in his will he donated many objects to the Museum including finds from the Anglo-Saxon Cemetery, part of his herbarium, cabinets of butterflies, moths and fossils; minerals, shells, birds and birds’ eggs, panels from the Sun Inn; the portrait of Henry Winstanley and drawings of the lighthouse; and for the ethnography collection decorated bark cloth, a Navaho saddle blanket and a green arrow head from New Zealand. Autographed letters from eminent people included correspondence from Henry VII, Napoleon, Joseph Banks and Queen Victoria. He also left funds to provide a salary for the first paid Curator – George Maynard.

If you want to know more about George, then Jeremy Collingwood’s book “Mr Saffron Walden. The Life and Times of George Stacey Gibson (1818 -1883)” is still available. Members of Saffron Walden Museum Society can read notes of a talk George Stacey Gibson – Aspects of his life and achievements given by speakers Jeremy Collingwood, Len Pole and Sarah Kenyon in Newsletter 45, Summer 2018, pages 15-17