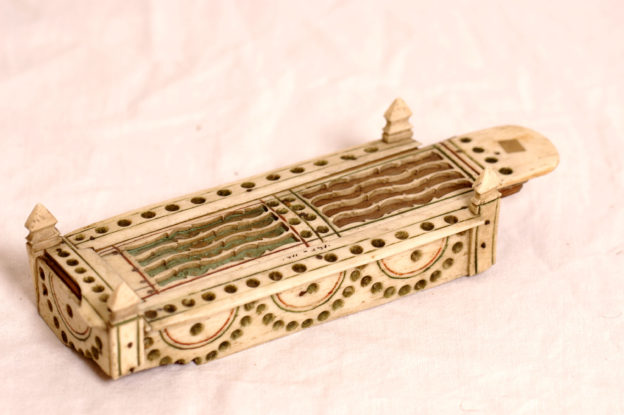 April’s Objects of the Month have been selected by Jenny Oxley, Collections Officer (Human History). She developed an interest in Napoleonic Prisoner of War items whilst working on the Norman Cross collections at Peterborough Museum in 2005.

During the Napoleonic Wars (1803-1815) over 100,000 French prisoners of war (POWs) were held captive in Britain.  Many remained captive for the whole duration of the conflict.

The existing land prisons on the South Coast and at Norman Cross (Peterborough) were insufficient to house them all, so extra land prisons were built. Decommissioned naval vessels known as “hulks” were also used, with over 50 in operation by the end of the conflict.  Medical inspectors from the Transport Board visited and reported to Parliament on the state of the hulks and prisons, with contractors and staff reprimanded and in a handful of cases dismissed for providing substandard services.

The standard daily ration for prisoners was: “half a pound of bread and half a pound of beef supplemented with barley, onions and cabbage or turnips; twice a week the meat was replaced with herring and cod.”

The luckiest of the POWs were probably those who were paroled officers. They were given a tiny allowance and had to live within the bounds of a designated parole town, but they were free to socialise with the local community.  Many prisoners whiled away their days making craft items to sell or teaching the locals French, Latin, Drawing, Music, Dancing and Fencing.

On display in the Museum throughout April as Objects of the Month will be examples of craft items made by French POWs, including intricately carved bone models and examples of straw-plaiting and marquetry.