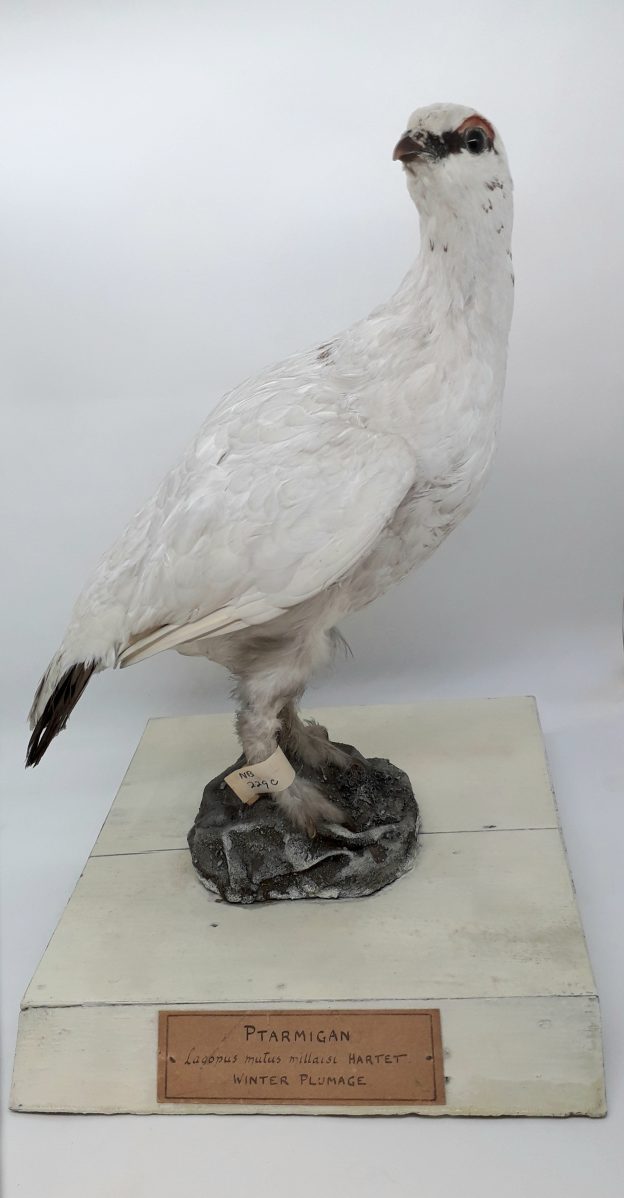 Our ‘Object of the Month’ for January is a Ptarmigan in white winter plumage. This bird was collected between 1835 and 1899, after Saffron Walden Museum opened in 1835 and before the end of the nineteenth century. It is a stuffed specimen mounted on an imitation rock with a painted wooden base. Sarah Kenyon, one of the Natural Sciences Officers at the Museum, chose it because snow has already fallen in Britain this winter. 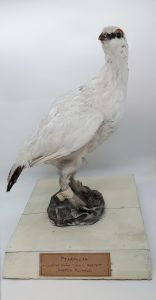 As cold temperatures and snow descend over Britain animals put on their winter coats. In Scotland several species change the colour and thickness of their fur and feathers to stay hidden, or camouflaged, and warm. They are the Mountain Hare, Pine Marten, Stoat, Reindeer and Ptarmigan. This adult male Ptarmigan, Lagopus mutus, shows the white winter plumage which helps the bird blend in with the snow and remain safe from predators, especially birds of prey. The feathers around their legs also help to keep in warmth. These small, plump game birds can be found on Scottish mountains, such as the Cairngorms, and on heather moors at high altitudes. They have a characteristic walk. In summer their feathers are speckled grey and brown which blends in with rocks, scrub and heather.

The fur of Mountain Hares turns from grey-brown to completely white in winter as they also need to avoid being caught by birds of prey. They live on heather moorland and in woodland above 300-400 metres in Scotland.

The Pine Marten is found in the north and centre of Scotland. Numbers of this predator are low but stable now that they are protected from persecution. They live in old native forests where the trees lose their leaves in winter. Their fur is brown with a yellow ‘bib’ on the chest. The brown fur becomes lighter in colour during winter to help blend in with the trees and snow. A thicker coat is grown to keep warm.

A herd of Reindeer live in the Cairngorm mountains. In winter they grow a thicker, lighter coloured coat of fur to protect against cold mountain temperatures and harsh arctic winds.

Stoats are predators in the same family as Pine Martens. The fur is light brown, white on the belly, and the tail has a black tip. This distinguishes them from Weasels which are smaller in size and have a brown tail.

In northern Scotland the fur of Weasels and Stoats turns white in winter to blend in with the snow, except for the black tail tip. This white fur colouration of stoats is called ermine and the fur was used to trim robes. 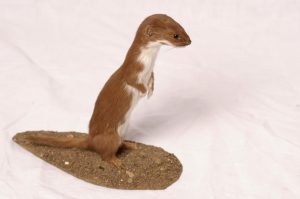 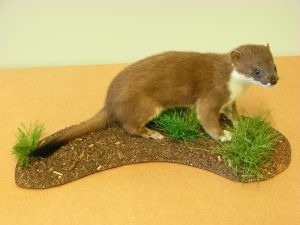 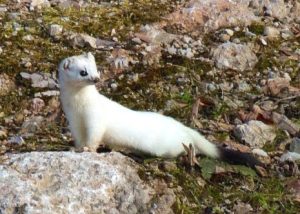