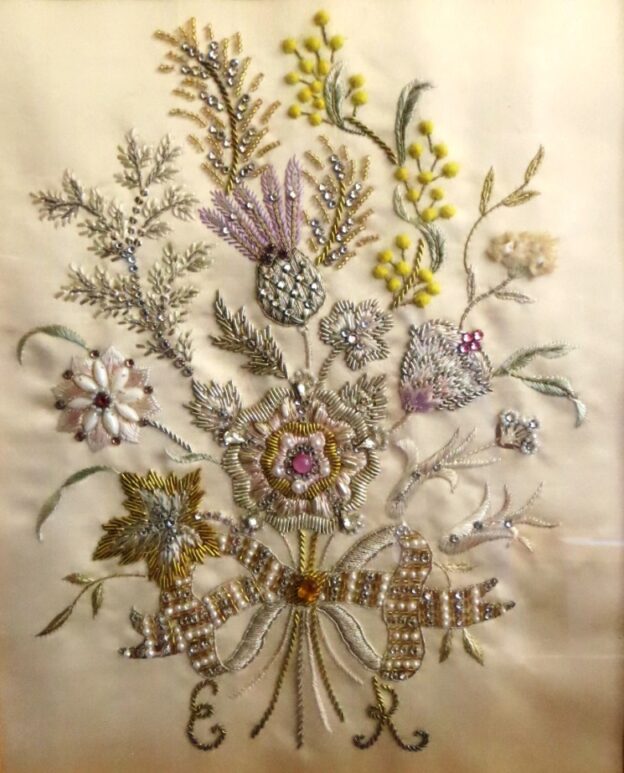 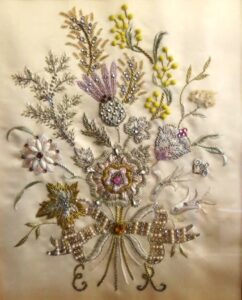 On display in the museum over the Platinum Jubilee weekend is this framed sample of the material used to make Queen Elizabeth II’s coronation dress.

The coronation was held on 2 June 1953 at Westminster Abbey, watched by 3 million spectators and a further 20 million following the event at home.

The sample was a gift from Norman Hartnell, the designer of the dress, to Miss Grizelle Fowler, as she had worked for him. Miss Fowler bequeathed the sample to the museum in 2016.

The coronation dress was ordered in October 1952 and it took 8 months of research, design and workmanship to create it. Hartnell put forward 8 different designs and Elizabeth chose her favourite.

It then took at least 3 dressmakers, 6 embroiderers and the Royal School of Needlework to create the detailed embroidery on the satin The embroidery features the national flowers and plants of Britain & the Commonwealth countries.

These include the English Tudor rose, the Scottish thistle, the Welsh leek, the Irish shamrock, the Canadian maple leaf and the New Zealand silver fern. The design was completed in seed pearls, crystals, coloured silks and metallic threads. #platinumjubilee #bigjubileelunch