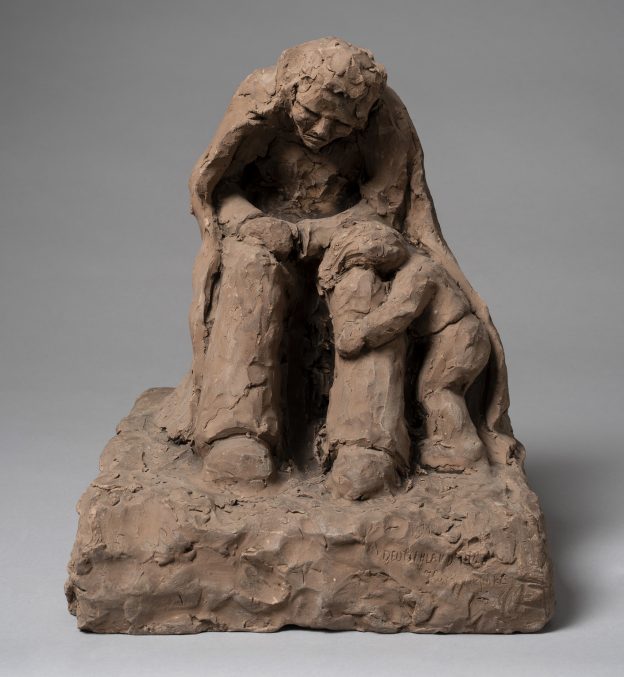 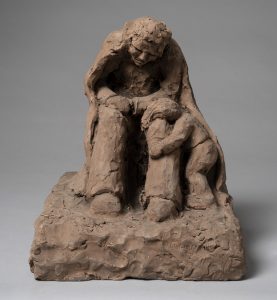 Despite the museum having been physically closed to the public because of Covid-19 lockdowns for many months, we have thankfully continued to receive many interesting research enquiries. Maybe in lockdown, some academic researchers had fewer competing distractions!  For us working behind the scenes, the constant flow of research enquiries, was a godsend and ensured the collections have still been utilised.

One of the researchers who contacted us is working on his PhD, the first ever in-depth academic study into the life and work of the famous artist Karl Weschke. The museum holds a very evocative sculpture by Weschke of a weeping mother and child, titled ‘Deutschland 1946’ which he produced using clay he dug up at the Radwinter POW Rehabilitation camp when he was interred there.  Some have claimed it may even be the artist’s earliest known work.

Weschke was born in central Germany near Gera in 1925 and became a member of the Hitler Youth, volunteering for parachute training in the Luftwaffe during the Second World War. In 1945, he was described as “insolent” when he was captured and ended up in a camp for hard-line prisoners in Caithness.  His mother petitioned for him to be freed in a prisoner exchange, but it fell through.  It was eventually decided that he was young and didn’t really pose any real threat, so he was moved to a more lenient student’s POW camp at Radwinter.

Radwinter North camp had been established in the grounds of the requisitioned Radwinter Rectory, now known as Radwinter Manor. The camp was the brainchild of Charles Stambrook, a Jewish refugee from Vienna.  It was intended to be a way to reach out to those it was felt could be “re-educated.”

The German POWs regularly visited local families, as it was felt that this would help “rehabilitate” and integrate them better into the local community. Weschke regularly visited Bessie Midgeley at Larchmount on London Road, Saffron Walden with other POWS and she encouraged his artistic talents.  He painted scenery for the POW’s theatrical performances.  He became an art student at Cambridge using their studios to work on his sculpture and carvings.  He later went to St. Martins, before abandoning sculpture for painting and found acclaim as a leading artist of the Cornish School, having moved there in 1955.  He achieved national and international recognition relatively late in his career. A one-man show at Kettle’s Yard, Cambridge, in 1980, prompted the Tate to start acquiring examples of his paintings and Tate St Ives held an exhibition of Weschke’s work in 2004.  His obituary from February 2005 makes fascinating reading about his life and work.

The sculpture we hold is believed to have been given by Weschke as a leaving present to Kelvin Osborn, who was then the YMCA Welfare Officer at the Radwinter camp. Decades later, Osborn donated the sculpture (by which time Weschke was now a famous artist!) for fundraising to the Friend’s School, Saffron Walden for an overseas development project they were undertaking.  It was purchased by Jean Strachan for £20 in the 1960s and it was later used again in the 1980s for fundraising for one of the school’s other overseas development projects, a water scheme in Bolivia.  The item remained unsold, so the family put in the donation money themselves and retained the sculpture.  The sculpture isn’t something which would naturally be displayed in a family home as it is quite raw.  The family eventually donated the sculpture to the Museum in 1984.