June’s object of the month celebrates the Lost Language of Nature project, with repair work to this hen harrier. With Lost Language of Nature, we want to hear your stories about wildlife and nature in your life, or rhymes, songs and sayings for all kinds of animals that you might have heard from parents or grandparents. For example, different old names across the country for hen harriers include Blue sleeves, Vuzz kitt, Grey gled, Furze kite and Goss harrier; or Ringtail for females, like this fragile mounted skin. Head to our website for more information https://www.swmuseumlearning.com/the-lost-language-project

This bird came to the Museum in the 1800s, and was taken from the area around Saffron Walden. Today, hen harriers only live in the north of England, north Wales, in Scotland and on Scottish islands, including Arran and Orkney. 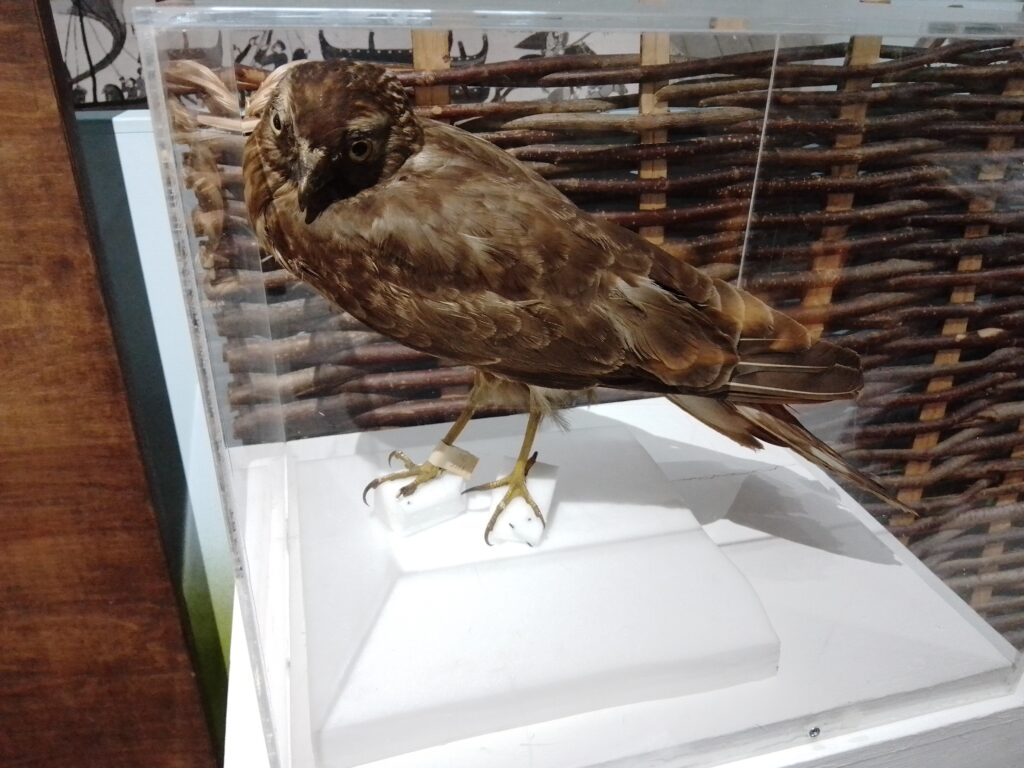 Hen harrier on temporary base during conservation work.

Hen harriers are one of the UK’s most endangered birds of prey, with only an estimated 545 breeding pairs left in the country. They are on the RSPB’s Red List of endangered species in Britain, but listed as ‘Least Concern’ globally by the International Union for Conservation of Nature.

Work carried out by the RSPB suggests that over 2,500 pairs could survive in the UK. They live in open areas with low vegetation, like heather moors.

Between 2014 and 2019, the RSPB ran the LIFE project to learn more about hen harriers in Britain, their movements throughout the year and to understand why their numbers are so low. They tagged over 100 birds that they tracked using satellites, and found that some fly 1000 miles to spend the winter in Spain and Portugal. Not all birds do this though – the brother of one of these wandering birds always stayed within 50 miles of where he hatched.

In the UK, hen harriers are protected under Schedule 1 of the Wildlife and Countryside Act, meaning it is illegal to kill, injure or capture the birds, their eggs or nests, or even disturb the birds and their young while they are nesting. Despite this, the study showed that the numbers of breeding hen harriers fell by 24% (about one-quarter) between 2004 and 2016. In particular, the project monitored seven Special Protected Areas in parts of the country where land is managed for driven grouse shooting. In these seven areas, hen harrier numbers fell by over 80%, which suggests that there is deliberate human action to reduce their numbers in these areas.