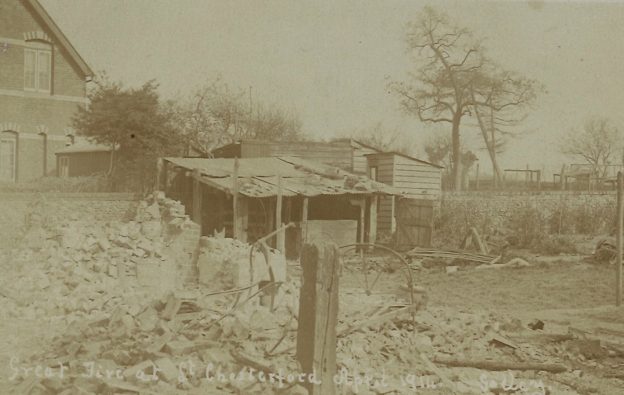 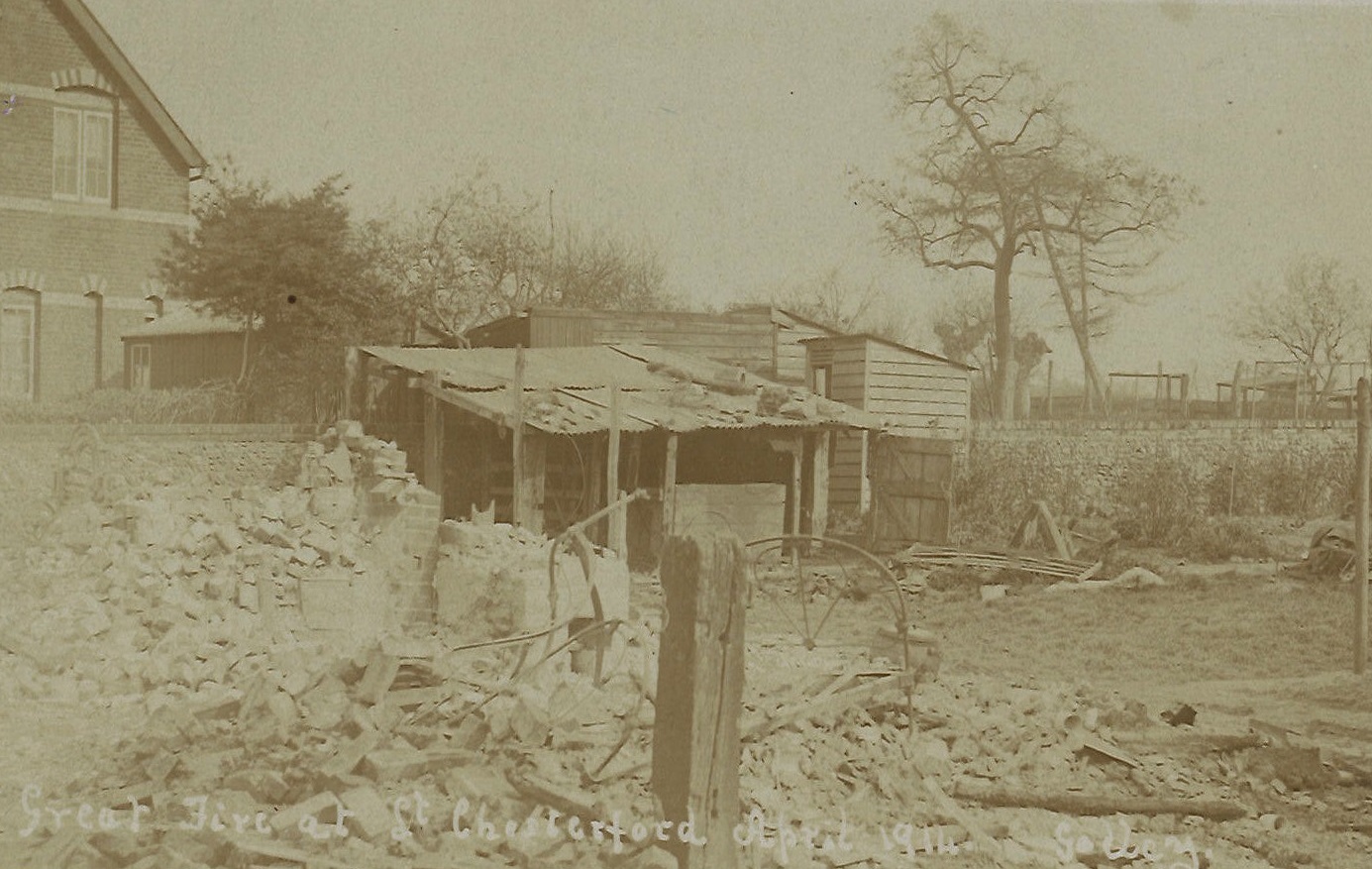 On the 7th April 1914, a fire broke out at Bordeaux farm in the parish of Littlebury.  Newspaper reports at the time suggested that in high winds, sparks from a traction engine caught light to some dry thatch.  The flames rang along the river path to Little Chesterford and then spread rapidly across the village.  Many of the timber framed thatched properties were burnt to the ground whilst the ones built using clunch (chalk bedded in rammed powered chalk) fared better.

The fire also highlighted the lack of effective fire-fighting equipment and poor communication that existed between local fire fighters. Littlebury had no fire pump, whilst Little Chesterford had only a small portable one for estate purposes.  The closest fire engine was based at the Mill in Great Chesterford, but it took over half an hour to attend once the alarm had been raised.  The Saffron Walden brigade was hampered in its efforts to attend, as they reportedly “lost their coal on the journey to the fire.”  Eventually additional brigades from Hinxton, Audley End estate and Sawston attended as well as the police, but the response had sadly come too late to save many of the properties.

Within 30 minutes of the fire starting it had already destroyed 2 farms, 2 pubs (The Crown and The Bushel & Strike) and 9 houses, leaving 43 out of 100 villagers homeless. The fire had taken everyone by surprise and spread so quickly that the alarm had been raised too late to make a difference.   The town’s labourers working in the fields saw the fire spreading at huge speed, they returned home to find their wives and children making frantic efforts to save themselves and their belongings.

Newspaper reports from the time tell the dramatic story of 100 year old Mrs Law who was rescued from her burning first floor room by Stacey Dyer and her son, who lifted her into a wheelbarrow and got her quickly to safety. Stacey Dyer was reportedly scarred on his face for the rest of his life following his heroism.  It must have been pandemonium as villagers and their animals ran from the flames.  One baby was missing for 2 hours before it was found safe.

Photographs show the village roads strewn with salvaged furniture and crowds gathering shocked by the scale of the fire and how quickly it had spread. The landlady of the Bushel and Strike (Pampisford Brewery) hastily prepared a shed so that they could continue to serve drinks to their shell-shocked customers.  A fire relief committee was established and the village reading room was used as a shelter for the homeless and store for their surviving belongings.  A fundraising campaign was advertised in the Daily Mail Newspaper. However, not everyone appreciated outside help, with Reverend John Stewart, vicar of both Chesterfords quoted in a subsequent edition of the newspaper as saying:

“We’re a proud people and like to help ourselves. Tell all the kind people who want to send money that we thank them, but do not need their help.”

Cheques from the Daily Mail campaign were reportedly returned to their senders! Archive material suggests local gentry stepped in and helped with the rebuilding work and financial loss.  Lessons were learnt following the fire, as all the local brigades vowed to work on better communication and to pool resources.