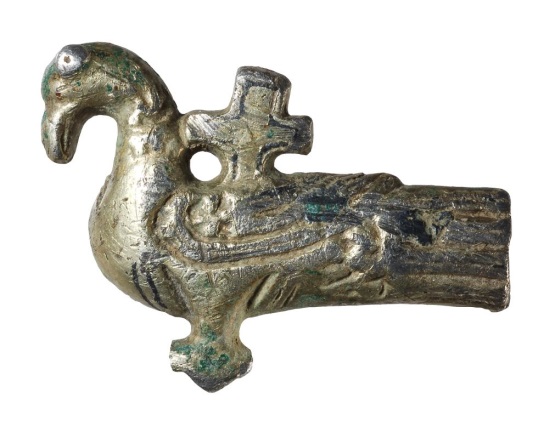 Saffron Walden Museum is taking part in Treasure 20, a partnership project of the British Museum and Portable Antiquities Scheme, to highlight the important contribution of the Treasure Act to public museum collections around the country. Treasure 20 is a nationwide project which celebrates 20 years since the Treasure Act 1996 came into force in September 1997.

As part of the project, we are re-displaying our Treasure case, adding new archaeological finds such as a rare brooch in the form of a dove and a silver coin from Anglo-Saxon times, a delicate medieval finger ring and a tiny gold brooch with a pair of clasped hands.

The finds reflect the range of objects reported by metal-detectorists and also chance discoveries made by members of the public, like the Anglo-Saxon coin. The ring and brooches were all declared treasure under the Treasure Act 1996 and were purchased for the museum’s collections by Saffron Walden Museum Society Ltd, with generous grant-aid from the Arts Council England / Victoria and Albert Museum Purchase Grant Fund and The Headley Trust. Our collections and our understanding of local heritage have been enriched by over 50 acquisitions made through the Treasure Act.

As well as displaying new finds in the museum (look for the special Treasure20 labels), we will also be featuring a selection on the museum’s website and social media for 20 weeks, from June to October. Follow us on Twitter and Facebook to learn more about our Treasure collection or click on the gallery below.  We’ll be adding to the gallery throughout the project.